What to expect from the Aromamizer Titan V2 from Steam Crave?


The only difference of the Aromamizer Titan V2 compared to the V1 is the arrival of the deck for the coils in series. But the Titan remains the Titan!

The Aromamizer Titan V2 is one of the aliens in the RTAs. Steam Crave has always wanted to show that it has the biggest and the Titan remains the biggest atomizer on the market in both diameter and capacity. This V2 hardly changes anything from the V1 and if you already have the first Titan then you don’t really have to buy it. But if you want to know what it feels like to vape on a really big, but really big atomizer, then the Titan is here to send you in the middle of the clouds.

The serial deck for the Aromamizer Titan V2

On the conception, design and dimensions, the Aromamizer Titan V2 does not change. This is an identical copy of the first, but the main difference is that the deck can accommodate coils in parallel or in series. This is not a separate deck that you have in the box. You will have coils in series or in parallel depending on how you are going to place them on the same deck.

The difference between series and parallel coils

You are going to ask me, with your candic air, what is a parallel coil and another in series. In all atomizers and RDA in double coil, you always vaping in parallel coils. This means that the resistance is shared (divided) by the two coils. If you put two coils with a respective resistance of 0.3 ohm on any atomizer, then you will have a final resistance of 0.15 ohm. This is called a parallel deckau.

The serial deck does the opposite, it adds the resistance of the two coils. If you put two 0.3 ohm coils on a deck in series, then you will have a final resistance of 0.6 ohm. How is this useful? This is especially useful for mech mods. The final resistance on a mech mod is important for safe vaping. And when you play with coils that are too low, you risk having accidents. 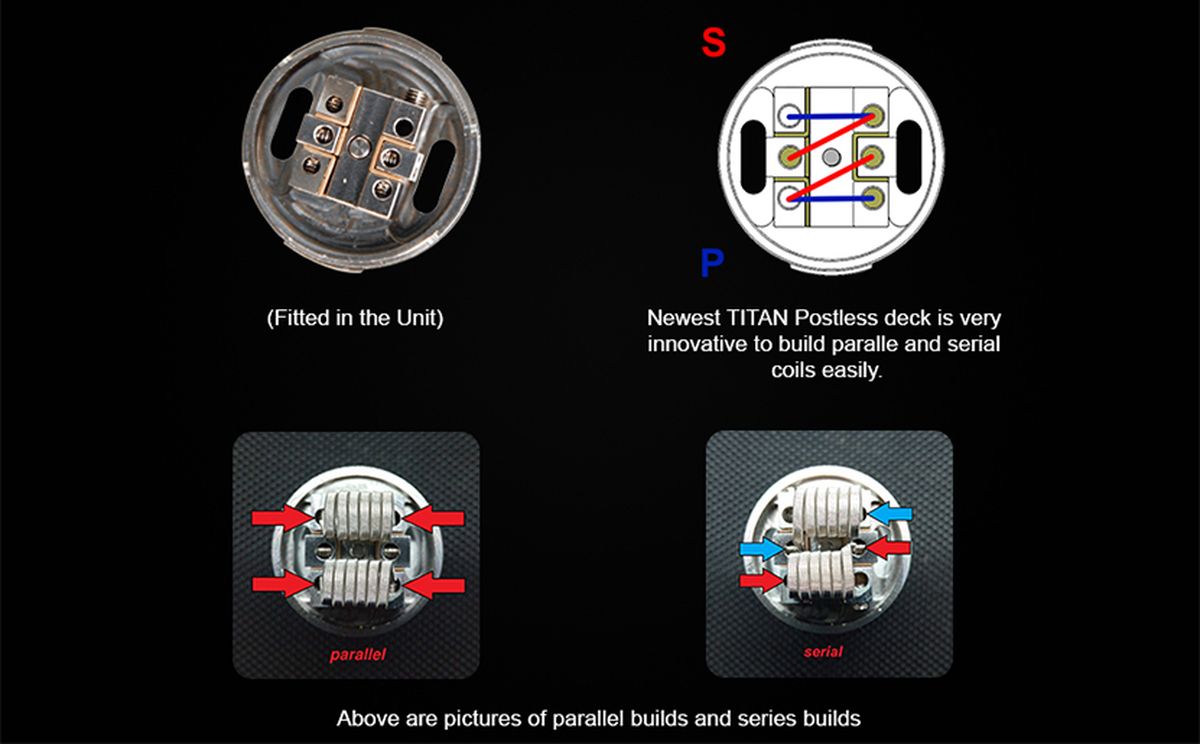 Coils in series allows you to aim for higher resistances by having a good experience of vape. For example, if you put the Aromamizer Titan V2 on a Hammer of God which accepts two batteries in series and in parallel, then you should aim for 0.30 ohm, see 0.35 ohm if you use Samsung type batteries 30T (30A). And so, if you use the Titan V2 series deck with coils having an individual resistance of 0.20 ohm, then you are safe, because you will have a final resistance of 0.40 ohm.

Titanic capacity and diameter for the Aromamizer Titan V2

The Aromamizer Titan V2 is the largest atomizer on the market. It has a diameter of 41 millimeters and there are only two mods that can accept it. The Titan PWM 1.5 from Steam Crave which has a dimension of 49.5 millimeters and the Hammer of God from Vaperz Cloud (50 millimeters).

Be careful, the Hammer of God is a serial mech mod, so it is only for the most experienced users. The Titan PWM 1.5 is an electro box with 4 batteries in parallel, so you will have a titanic autonomy.

In addition to a crazy diameter, the capacity of the Aromamizer Titan V2 would make a dromedary jealous! The Titan V2 can be used as an RDA with a 4ml tank, in the standard version it offers 20ml capacity. And if you use the extension, then you have 32ml capacity! Look no further, this is the largest capacity atomizer on the market.

The Aromamizer Titan V2 is ideal for truck drivers or those who work outdoors all day. They don’t want to bother filling their tanks every 10 minutes. If you install the extension then you will have plenty to last all day even if you’re vaping like crazy. And if you use the Titan PWM 1.5 box, then you will also have an autonomy that will last all day without any problem.

Am I going to buy it? It’s not really my style of vaping, but if one day I can afford it, I just want to show off with such a monstrous atomizer. Dear Steam Crave, if you pass by, send me this big monster to have me review it for you!

And contrary to popular belief, the flavors are good on the Aromamizer Titan V2, it’s not just a cloud machine. On pre-order, it is around 80 dollars and if you buy it as a kit with the Titan PWM 1.5 box, then it will cost you around 170 dollars.