What to expect from the Trilogy XL 40 RTA from VaperzCloud?


The Trilogy XL 40 RTA from VaperzCloud has everything to become a hit. What does it offer that is new compared to the 30mm Trilogy?

The Trilogy XL 40 RTA is the latest addition to VaperzCloud which has already enchanted us 2020 with its Trilogy in 28 and 30 mm. We can say that 2020 was the year of VaperzCloud, because it offered us excellent RDAs like the Valhalla 40 or the Asgard. The Trilogy XL 40 RTA was a logical continuation to complete the range. So what does he bring that is new?

In terms of capacity, the Trilogy XL 40 RTA offers us almost nothing new. 2 ml as standard, 5 ml with the pyrex bubble, but the novelty is the pyrex in 10 ml. The Trilogy 30 could do 10ml, but it was bubble. This time, VaperzCloud offers us a chimney extension and a straight 10 ml pyrex, which makes the aesthetics much more successful. This is a very good point.

Then, on the deck, we can put big coils without any problem. Because the deck build is 28 mm while it was 22 mm on the Trilogy 30. Thus, the Trilogy XL 40 RTA is made for the big vape, full of flavors and we can have fun by testing all the coils exotic be it alien, framed staple, fralien, etc. 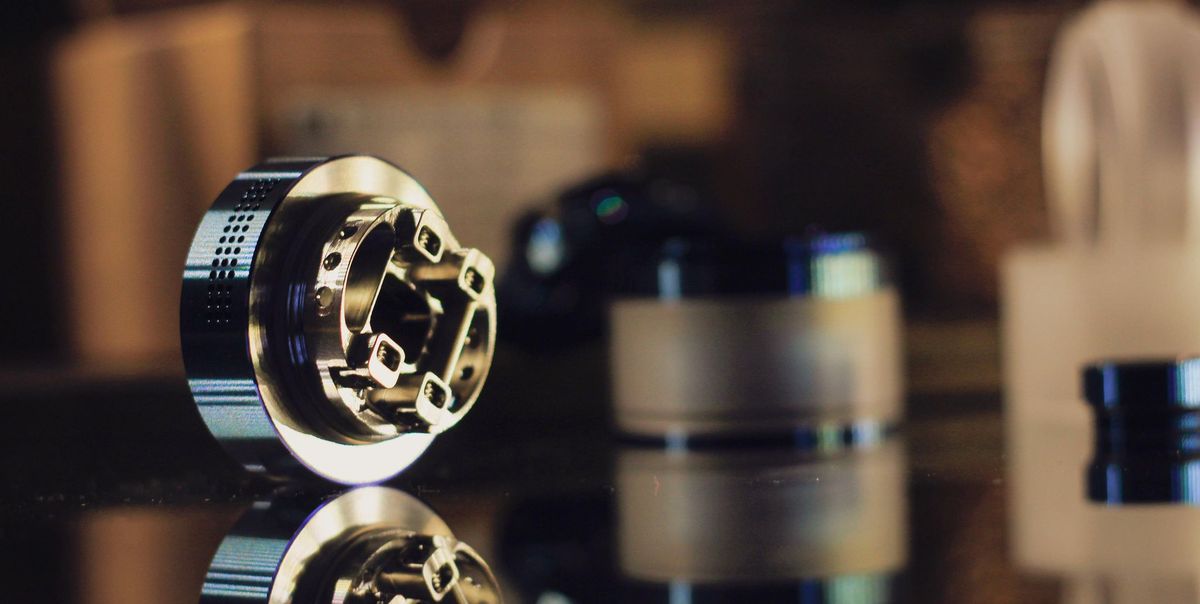 Another novelty of the Trilogy XL 40 RTA, which I haven’t seen in action yet, is that VaperzCloud tells us that we can change the coil or cotton without emptying the liquid. So a system like the Ragnar or the Supreme V3 from Steam Crave (and the comparison is no coincidence). So we could unscrew the reservoir juice, but I didn’t see a locking system.

You’ll have to see the reviews to see how it works. And if so, then the Trilogy XL 40 RTA has corrected all the possible flaws of the old models and can claim to be one of the best RTAs on the market for heavy vaping.

One of the big innovations of the Trilogy 30 was that with its airflow and chimney system, it created a kind of negative pressure under the deck. This allowed for a very smooth and ultra-quiet vape. In fact, you could vape like crazy on the Trilogy that it wouldn’t make any noise.

This innovation comes from the Asgard RDA which shares the same deck with the Trilogy. This is also one of the reasons the flavors are monstrous on this RTA. For Trilogy fans, the Trilogy XL 40 RTA has it all. It fixes all the little flaws of previous models, makes changes where needed. But the competition is serious with the Ragnar or the Titan V2 from Steam Crave.

I will be told that I am comparing pears and apples by comparing the Trilogy XL 40 RTA with the Ragnar or the Titan V2 from Steam Crave. But the two want to seduce fans of the very big vape. The Ragnar is an RDTA, but in advanced version it offers more options than the Trilogy.

Over 25ml liquid and plenty of different decks to suit all vapers. And the Titan V2, which is also an RDTA, can go up to 32ml and it’s 41mm in diameter. Obviously, each of its attys will target a different audience and therefore, the wallet will decide.

And in that area, the Trilogy XL 40 RTA is more expensive since it’s $ 100 while the Ragnar and Titan V2 are around $ 60-80. But there are a lot of Trilogy fans out there and this 40mm Trilogy will fill everything they expected from a true 40mm RTA. The design is superb, even if the only mods capable of accommodating it without being ugly are the Hammer of God (mech mod) or the Titan PWM 1.5 from Steam Crave.

Am I going to buy it? No, it’s clearly beyond my means. I wouldn’t think of putting more than 100 bucks in an atomizer. But if by some miracle VaperzCloud comes by and wants to send me one, I would love to review it: D.