What to expect from Wotofo’s Troll X RTA ?


Wofoto’s Troll X RTA offers us different Airflows depending on the type of vape we want. Small update or big innovation?

The Troll X RTA is Wotofo’s new RTA for a resolutely Dual Coil atomizer even if you can also vape in single coil with it. It is the successor to the RTA Troll which was released by Wotofo in 2017. And for the time, this RTA had its share of good surprises and generally positive reviews. This time the Troll X RTA returns changing the way Airflows work.

When you look at the many RTAs and RDAs that are currently out on the market, you think you’ve reached the maximum peak in terms of flavor. We tweaked everything we could to always have the best flavor. And so, the latest trend is to allow very fine adjustment of the Airflows. It had started with the Brunhilde who had revolutionized this approach. 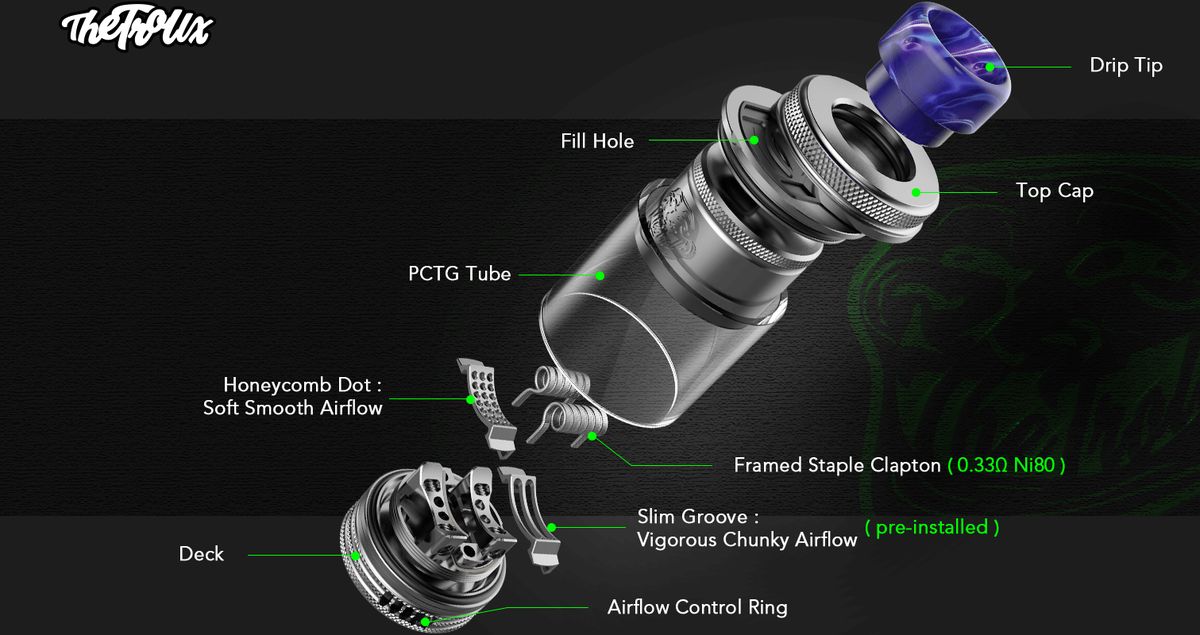 And we feel that all the vape makers have borrowed this wagon, because when you go into the Airflows in detail, then you can always get a little more flavor or vapor than usual. This Troll X RTA has a dimension of 24mm and is configured for Dual Coil, although it is also compatible with single coil.

In capacity, we have 2, 3 and 4 ml. The 2 and 3 ml are in straight pyrex while the 4 ml is in bubble. It’s strange to go with Dual Coil and only offer 4ml capacity. When you look at Steam Crave atomizers, then we greatly exceed 5 ml, even for a Single coil like the Supreme V3.

But the main selling point of the Troll X RTA is its airflow system. Like many brands, Wofoto has taken the insert train. And for this Troll X, it offers two types of insert, the first in the shape of double slits and the second in the shape of Honeycomb. Depending on the brand, the insert with the slits should give you a fairly airy and even brutal pull. It is made for fans of the big vape.

On the other hand, the Honeycomb insert will give you a much smoother vape and therefore, close to a restrictive DL draw. But given the design of the atomizer, the Troll X RTA is for fans of the aery vaping. Now, we can say that the Airflow insert is nothing new in vaping. In fact, Wotofo offers a little novelty by allowing easier installation of these inserts.

Brands are increasingly offering exotic coils such as RDA Mongrel who also offered a Framed Stape. And what about the Vertex MTL from Hellvape which offers more than 10 coils in its box?

The Troll X RTA is a welcome update

The first RTA Troll was from 2017 and it’s good that the brand is offering an updated version. This Airflow system is interesting, but we will have to wait for in-depth reviews to see what is needed. Because even if the fitting of the inserts is easier, it is of no interest if the flavor is less present. We will say that this is a small update to the current range of Wotofo.

For the price, the Troll X RTA is around $ 40 and I find it quite expensive. Because on the whole, we have little tweaks here and there, but it’s not madness in terms of innovation either. Am I going to buy it? No, it wouldn’t bring me back anything and I already have what it takes with either the RTA Druga or the Supreme V3. But if Wotofo does go through there and they’ll send it to me, I’d love to give it a review.