Uwell Valyrian 2 review, worthy of the throne of vapor and flavor?

Uwell Valyrian 2 wants to regain the throne of clouds and starry flavor. Uwell is a trusted brand in vaping. In recent months, the company is trying to return to the front of the stage by renovating its old ranges. We had the Crown 4 which was successful. And now, we have Uwell Valyrian 2 who is the successor of the Valyrian, released during 2017.

Big vape or leave it with the Uwell Valyrian 2

With the Crown, Valyrian has made the brand known for its irreproachable quality both in terms of vapor and flavor. And when we look at the Uwell Valyrian 2, then we can say that Smok was not in the stars with his TFV16. I do not know if the Chinese know anything we do not know. But it looks like they are predicting the return of the big cloud trends. While I thought it was the return of the MTL. At the beginning of 2019, this may have been the case, but with the summer and the next year, big cloud make also it’s way.

The minimum recommended power for Uwell Valyrian 2 is 90 watts. Oh yes, they do not joke. And I think they are forced to increase the power, because like Smok, this Valyrian 2 uses only Mesh coils. And the trend of Mesh is confirmed at full speed. Because with the release of this tank, Uwell also proposes Mesh coils for the first Valyrian.

The features of the Uwell Valyrian 2

The clearomizer impress at first sight. A dimension of 29 x 60.6 millimeters. Yes, the height is more than 60 mm which is gigantic. The capacity of the tank is 6 ml. The brand does not tell us if it will offer a separate pyrex as with the first Valyrian. In the latter, you could buy a pyrex to increase the capacity to 8 ml. But since at the beginning, Uwell Valyrian 2 is 6 ml, i think that it will be the max capacity. At the same time, Smok did not hesitate to swing 9 ml with his TFV16.

Two major new features for the Uwell Valyrian 2. The first is a patented technology that automatically cleans condensation. When you are vaping, there may be condensation and at high temperatures, you may leak by the airflows. Uwell believes that its technology will avoid this type of leakage by spraying the superfluous liquid directly.

The second big novelty is the filling which is done in the form of cover. It seems to be more comfortable. And you can directly inject your bottles of 60 or 100 ml. And you’ll need lot of juice, with coil in Mesh, a capacity of 6 ml and a considerable power, Uwell Valyrian 2 will pump like a well of oil at the beginning of the 20th century. They have also improved the Drip Tip, but the design is quite classic.

The term FeCrAl simply means that the wire uses a Kanthal-based alloy. It is a metal very used in coils. And we know that Uwell is not going to use moldy thread, so we can trust the quality of the wire.

Note that I am slightly mistaken, because it is not entirely Mesh. The first quadruple coil in 0.15 ohm seems to be conventional coils. But all the others are in Mesh. And frankly, the starting power is really consistent. And it’s a shame, because the tank is beautiful and it has a superb restitution of flavors. But it’s really too powerful for little vapers.

For color, you have the choice between sapphire blue, black, stainless steel, rainbow, purple and red and black.

This post concerns only the Uwell Valyrian 2 tank, but Uwell has released a complete kit with Valyrian 2 mod and the tank of the same name. And when you see the face of this mod, then you say to yourself: Oh yeah, it’s normal that their starting power is 90 watts. 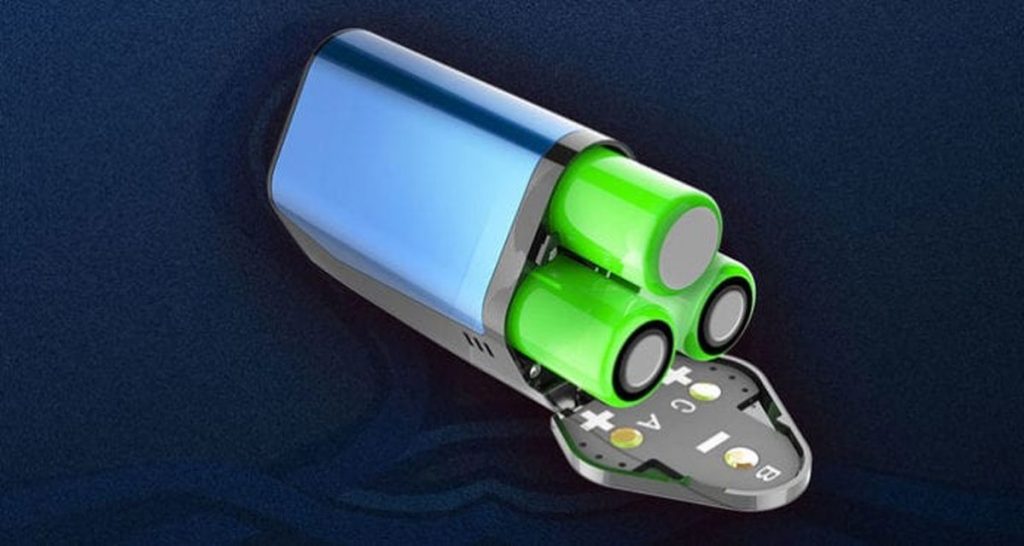 No, but have you seen this monster! A triple battery in 18650 that can swing from 300 watts. The mod size is 49 x 41 x 74 mm. Uwell tried to reduce the size of the thing, but it’s still pretty big. We appreciate that each battery has its separate chamber to reduce the risks.

The price of Uwell Valyrian 2

Regarding the tank, the price of the Uwell Valyrian 2 is around 40 to 60 dollars (25 dollars if you use the coupon V819 on Sourcemore). Yes, it’s a price, but Uwell has never skimped on quality. We also have slightly high prices on the coils for a pair at $ 15. However, the brand ensures that these coils last much longer.

For the mod, prices range from $ 82 to $ 100 ($ 44 if you use the UV2M coupon on Sourcemore). And again, that’s understandable, because it’s still a mod with triple battery. The finish is splendid and there are no risk that the mod will burn or something as such with lot of boxes from Smok.

Finally, you can buy the complete kit for a price between 131 and 140 dollars (about 66 dollars with the UV2K coupon on Sourcemore). The kit is interesting because the mod will be powerful enough for the Uwell Valyrian 2 tank to express itself in its native language.

An irreproachable tank on the quality

In conclusion, Uwell Valyrian 2 shows that the big clouds will always have a place in the heart of some vapers. The concern, in my opinion, is that you are forced to constantly go up and we see it with the triple battery mod. At the same time, it would be much more cool to work on the MTL, because even if we leave a lot of atos, the price and the power remain acceptable.

However, there are people who are only vaping in high power. And above all, we did not have clearomizers that swayed as much with factory coils. The fact that the Uwell Valyrian 2 arrives at the same time as the TFV16 is not a coincidence.

Where to find the Uwell Valyrian 2?