The Rincoe Mechman 228W Mesh kit surfs on the wave of aesthetics and robustness. In recent times, each boxe looks like the others. There is no major innovation, but it seems that Rincoe wants to stand out from the competition. Rincoe is a brand that has not released a lot of products. But when it does, in general, they are noticeable in the vaping community. So, Rincoe gave us the excellent Manto kit, the Neso X pod or the Ceto pod.

Rincoe Mechman Mesh Kit 228W. One of the most customizable box on the market. Customizable stickers. Metal frame, great impression of solidity. The tank gives good flavors and vapour with its coil in Mesh. 34.90 dollars on Sourcemore with the RMK coupon.

34,90 dollars on Sourcemore with the coupon RMK

The appearance of the Rincoe Mechman 228W Mesh kit is just superb. Mechman boxe looks like a mechanical man. And the brand has everything on design and huge personalization. The set is very solid and the boxe is surrounded by a metal frame.

Despite the fact that it looks impressive, the Rincoe Mechman 228W Mesh kit is very ergonomic and fits well in one hand. Given the irregular shape of boxe, no slipping or something else with this one.

When you buy the Rincoe Mechman 228W Mesh kit, you have the choice between 3 designs, wings, bones and box. This is about the shape of the frame that surrounds the Mechman 228W. In the boxed form, you will have a classic square as if the boxe was enclosed in a metal frame. In the wing shape, you will have a kind of large central belt. And finally, the bone shape indicates a much denser frame. Personally, the wing shape is really very beautiful. 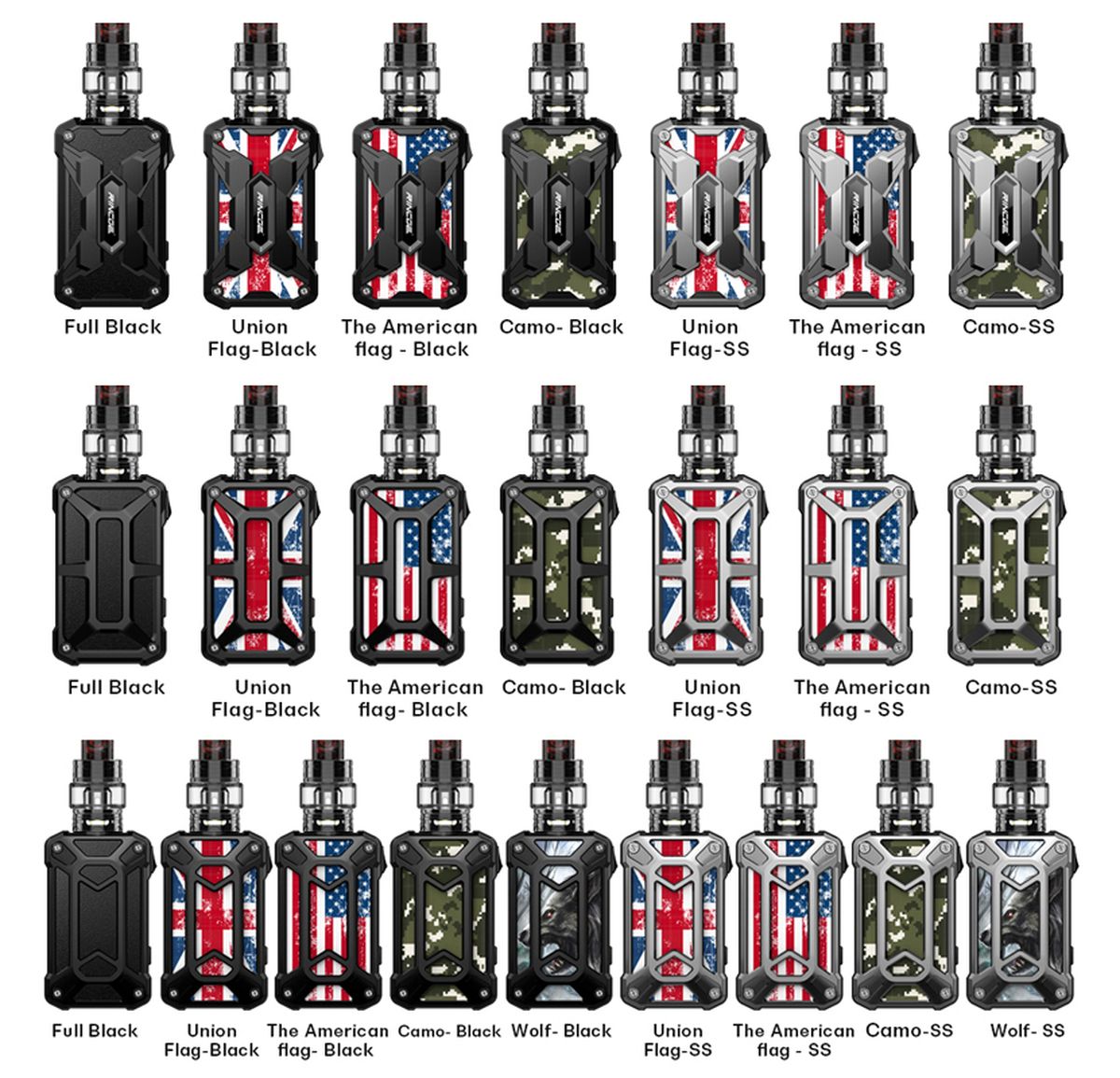 But the design of the Rincoe Mechman 228W Mesh kit does not stop here. You have customizable stickers. Rincoe offers 3 different stickers in 2 different colors. You have the choice between black and stainless steel. And for the stickers, you have the Union Jack, the American flag, the camouflage and the wolf.

The American flag, the Union Jack and the camouflage are available for wing and box frame. And for the bone frame, you also have the wolf that is the most beautiful effect. Together, these suits offer you 20 different designs for one boxe. It’s a feat and it can satisfy everyone’s tastes.

Rincoe Mechman Mesh Kit 228W. One of the most customizable box on the market. Customizable stickers. Metal frame, great impression of solidity. The tank gives good flavors and vapour with its coil in Mesh. 34.90 dollars on Sourcemore with the RMK coupon.

34,90 dollars on Sourcemore with the coupon RMK

Put your own stickers on the Mechman 228W kit

Maybe you do not like the stickers provided by default and want to put yours. No problem. You can unscrew the panel, create a sticker in 81 millimeters by 46 millimeters and you can stick it in a few minutes!

The features of the Mechman 228W box

The features of the boxe Mechman 228W remain fairly classic. The power ranges from 1 to 228 watts. We have the power mode (VW), temperature control (TC) that supports Ni200, SS and Titanium. You also have the Bypass mode that allows you to use your boxe Mechman as a Mech mode, but with all the security. The mod is made from zinc-aluminum alloy. 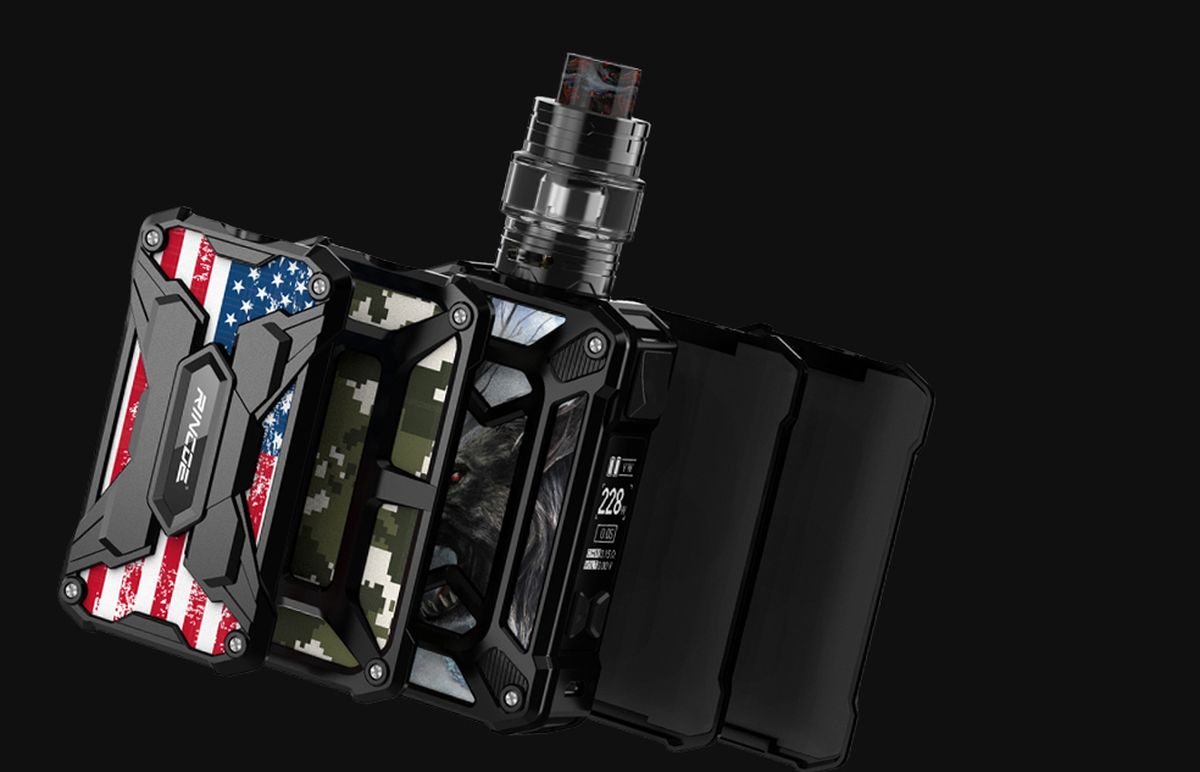 The features of the Mechman Mesh tank

The kit also comes with a Mechman Mesh tank. The tank has a capacity of 4.5 milliliters and it uses coils in Mesh. There are 2 types of coils with this tank, respectively of 0.25 and 0.2 ohm. The recommended power range is 50 to 80 watts. This means that this tank can suit both beginners who want to learn the direct restrictive vape, but also experienced vapers.

I had trouble finding a tank that offers coils of 40 to 60 watts. We have the Valyrian 2, but the Mechman Mesh Rincoe could be a serious competitor. The vape is quite tasty and it’s smooth. From 70 watts, this tank produces a huge amount of vapor even if my Hotspot is around 65 watts.

The price of the Rincoe Mechman 228W Mesh kit

The price of the Rincoe Mechman 228W Mesh kit is around 60 dollars. On the official Rincoe store you can find all the stickers and colors available. Other sites also offer several combinations, but the official site will allow you to find all of them. On Sourcemore, you can find the kit at $ 34.90 with the RMK coupon.

Regarding the coil of the tank Mechman Mesh, you can find them from 9 to 12 dollars on FastTech for a pack of 5. Coils are quite affordable and it’s always a good thing.

Where to find the Rincoe Mechman 228W Mesh kit?