Aries 30 from G-Taste review, 10 ml and triple coils for this RTA!

The Aries 30 from G-Taste shows that there are no more limits in the RTAs. It’s hard to stand out in the vape nowadays. Either, you offer a product that excels in all areas. Either, you stand out by the exaggeration. G-Taste took the second path. A rather unknown brand that has launched some pods and accessories and this time, it offers the Aries 30. A RTA with outrageous capabilities.

Good deal on Aries 30 from G-Taste

Aries 30 from G-Taste is an RTA with a capacity of 6 and 10 ml. It can support double and triple coils. A machine to make big clouds. An interesting Airflow setting. $ 22.94 on Sourcemore with the coupon GTA.

22,94 dollars on Sourcemore with the coupon GTA

The Aries 30 G-Taste stands out in only two areas. The first is the capacity which can be 6 ml or 10 ml. I think it’s one of the rare RTAs to reach 10 ml. We had the TF16 with its 9 ml, but is a clearomizer. The Aries 30 have an Airflow in 12 levels. The usual holes, but that allows to have a pretty fine adjustment depending on the vape we are looking for. These holes are positioned in 3 levels with a ring that can be adjusted for a semi-aerial or aerial vape. 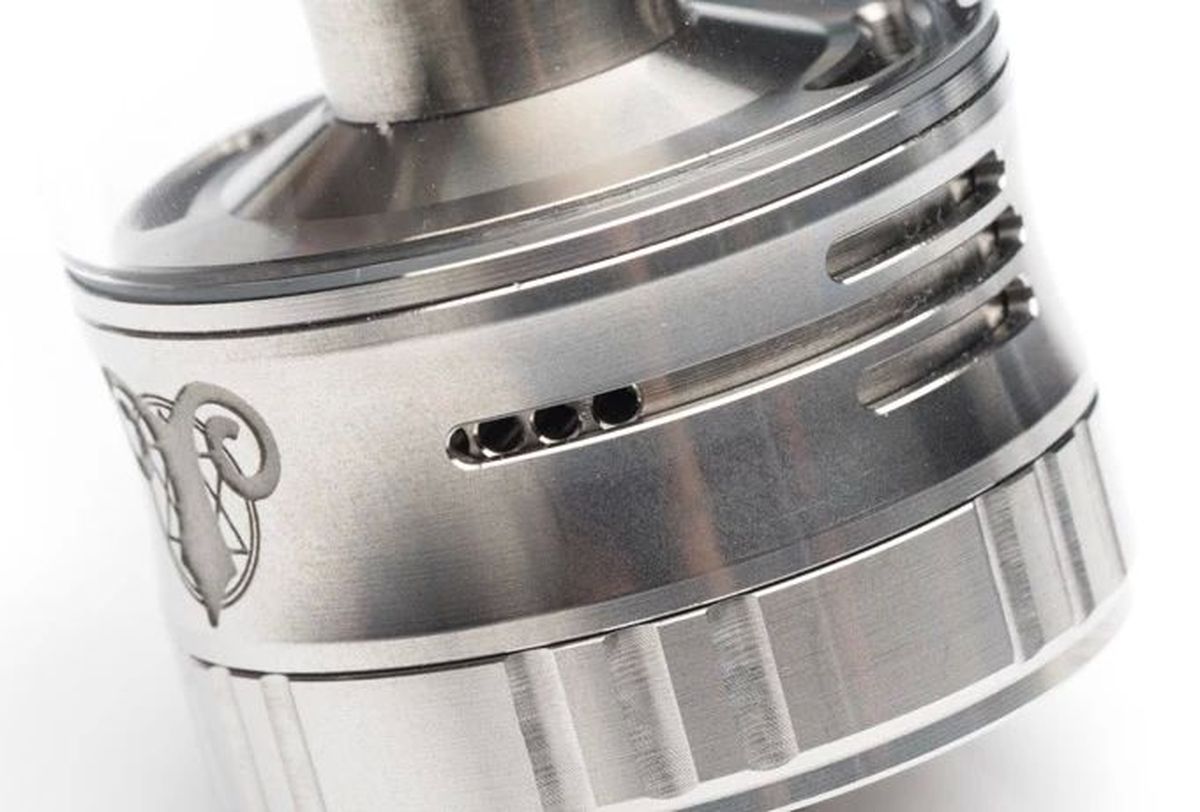 And the second aspect of the Aries 30 is its deck. The plateau is very wide which can accommodate a double or even a triple coils! Triple-coil decks are very rare and for good reason it’s just a cloud machine with no flavor. Even with the double coils, one can make very big clouds, then imagine what a triple coils can give. The width of the deck will allow to use the most exotic coils.

But I wonder if we can put 3 coils aliens on this deck. This could be vaping cannon! This is clearly not an RTA that I would buy. Even an double coils RTA don’t interests me. And for a more versatile atomizer, I could go for an Blotto RTA that can do Single and Double coils.

The capacity of 6 and 10 ml is not a coincidence. Because in his tests, G-Taste had to realize that with this configuration and this deck, Aries 30 must be a real juice pump. But one thing we like is that tanks are straight and not bubbles. And this is the case of both tanks. In the package, we will have a chimney extender to put the tank of 10 ml. And with a straight tank, we have a design that can become interesting.

Clearly, G-Taste will promote the Aries 30 for its outstanding features. But will it give flavor, I doubt it. On the one hand, the more you increase the number of coils and the more the flavor will be mutated. In addition, if you put the tank of 10 ml, the extender will bring more air and therefore fewer flavors in the end.

Good deal on Aries 30 from G-Taste

Aries 30 from G-Taste is an RTA with a capacity of 6 and 10 ml. It can support double and triple coils. A machine to make big clouds. An interesting Airflow setting. $ 22.94 on Sourcemore with the coupon GTA.

22,94 dollars on Sourcemore with the coupon GTA

The dimensions of the Aries 30 remain correct despite a large size. 58 x 30 mm for the 10 ml version and 49 x 30 mm for the 6 ml version. The material of the ato is stainless steel and therefore, it is certain that the Aries 30 will heat up if you put triple coils. However, the deck is large enough to accommodate double aliens or transformers. The Aries 30 is an RTA made for cloud competitions and you can have fun with all the exotic coils on the market. It would be surprising to use it for its main atomizer.

For its launch, the Aries 30 is about 50 dollars at Chinese sites. It’s expensive, but the price will drop in the next few months. I think the Aries 30 may be suitable for an extra atomizer. Just an excuse to make very big clouds without much difficulty.

Where to find the Aries 30 of G-Taste?