My review of the RDTA Aromamizer Supreme V3 by Steam Crave. It is considered a flavor freak, but is it? Let’s go for the review!

The Aromamizer Supreme V3 is part of the Aromamizer range, released in 2020 and considered to be one of the best single coil atomizers, although it will be seen that this claim needs to be weighed. Steam Crave sent me the Advanced Kit for review and I sincerely thank the brand and you can find more information on their official website.

Technical specs of the Aromamizer Supreme V3 by Steam Crave

Whether you buy the Ragnar or the Aromamizer Supreme V3, always buy the Advanced Kit. Sure, there’s a price difference of around $ 20 to $ 25 between the standard version and the advanced kit, but you get what you pay for. The beauty of this range lies in its advanced version.

The advanced kit allows you to vape according to your style and your desires. The kit is supplied with 3 decks, for the single coil, the double coil and the mesh. For the latter, Steam Crave provides you with Meshs and cotton. You also have a whole series of accessories such as spare o-rings and screws, a o-ring for the Drip Tip, an adapter for a 510 drip tip (the default is 810). 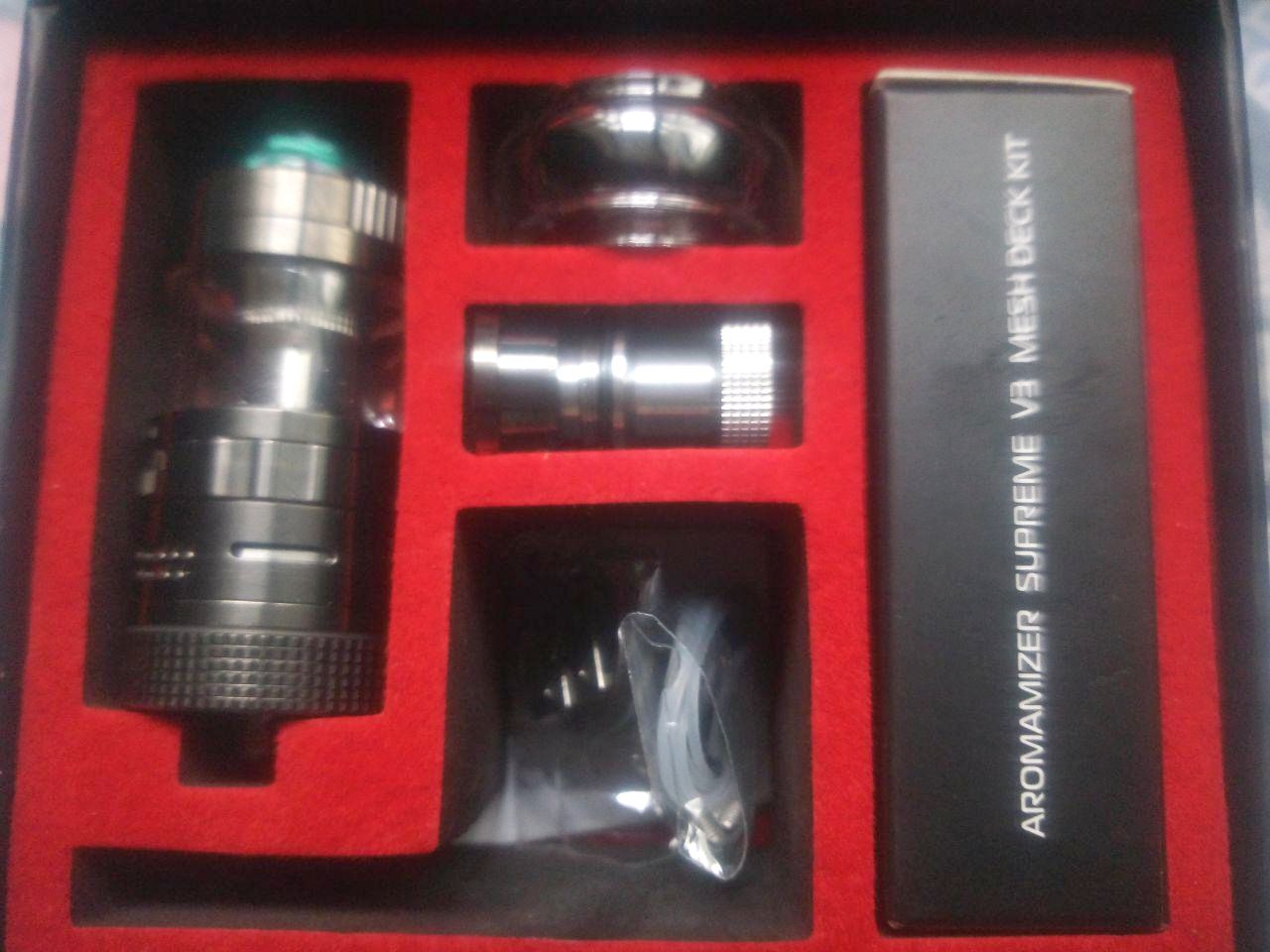 The standard capacity of the Aromamizer Supreme V3 is 6ml, but you can expand it up to 7ml with the bubble and a supplied chimney extension. I settled for the 6ml version because it suits me perfectly.

Decks for all vapes

With the advanced kit, you will have the single coil deck installed by default on the Aromamizer Supreme V3. In the box, you can also take the dual coil and the mesh. For this review, I used both the single deck and the dual coil. I am not a fan of rebuildable mesh and this goes for all atomizers. Not that I hate, but cotton with mesh must be perfect. Because a Dry hit with the Mesh and you will have the impression of vaping hot coals. We will avoid …

After a few days of testing, I think the single coil deck suits me perfectly. Of course, I have a lot more flavor with the dual coil, but I’m a perennial slacker and I have what it takes with this deck. Before, I vaped on the OBS Engine 2 which is in dual coil and which was known for its excellent flavors.

Well, the Aromamizer Supreme V3 in single coil is slightly below while it is a single coil. So the flavors are there, but for those who are used to vape in dual coils, you will find them slightly muted. After that, it depends on the cotton and the type of coil you use.

The coil and cotton on the single coil deck

It will take some time to master the wicking of the Aromamizer Supreme V3. The key is to completely cover the wells, but never insert cotton in them. If it’s clogged then you will have Dry Hits and if there is not enough then you will have leaks. You will tell me that this is the case with all RTAs, but it is even more true on the Supreme V3. 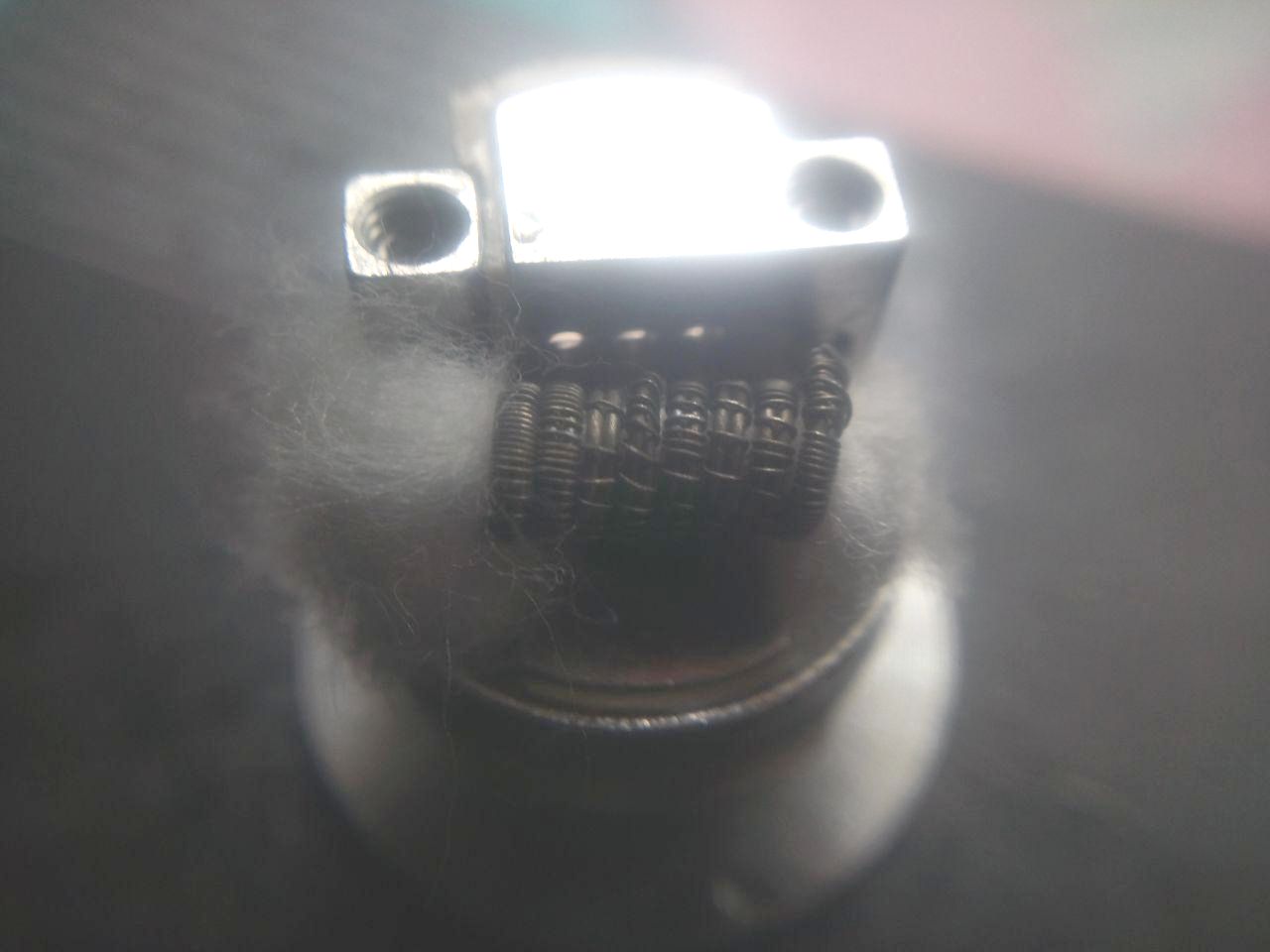 The Aromamizer Supreme V3 with the single coil deck. The Fused Clapton is a 2 × 26 with 36

Steam Crave recommends a 3mm coil for the single coil deck, but if you are using the dual coil deck, use a maximum of 2.5mm coils. You have to understand that the Aromamizer range was designed for a dual coil vape and if you are not afraid to ramp up, then you will have a much better vape. But don’t put anything bigger than a fused clapton or a triple fused clapton.

Beyond a very supplied kit with 3 different decks, the Aromamizer Supreme V3 is especially famous for its liquid closure system which is located just above the airflow. This is clearly marked with padlock icons. You turn the ring to completely close the tank. Once it’s closed, you can unscrew the deck underneath without pouring a single drop of liquid.

Before closing the juice control, first turn the tank upside down so that all the liquid on the deck goes back into the tank. Then you can close the juice control and unmount the deck. This inversion is not necessary if you just want to fill the tank. 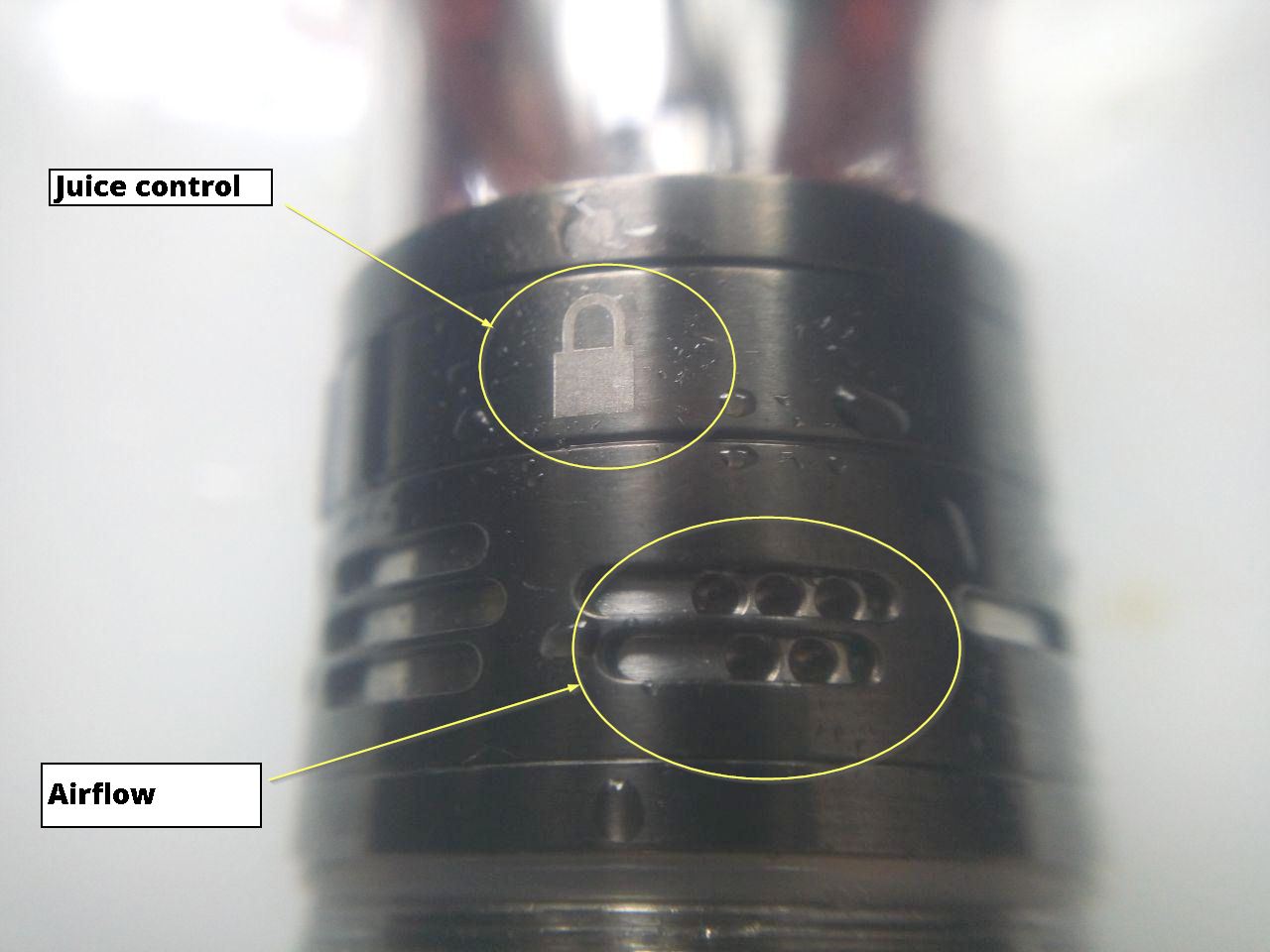 The Juice Control and Airflow rings on the Aromamizer Supreme V3

This liquid closure serves two purposes, on the one hand, you can change coils and cotton without emptying the tank. But it also allows you to fill the liquid without creating a pool. So keep this in mind, when filling the tank, always close the juice control before doing so. Otherwise, the liquid will go directly to the deck and you will have a torrent through the airflows.

I have tested this juice control dozens of times trying all configurations. And my god, it works every time. Not a single drop of liquid was lost. You will only leak with the wrong cotton, which has happened to me more than once.

Installing the different decks on the Aromamizer Supreme V3

For the anectode, I had never used an Aromamizer from Steam Craver (I had the Glaz Mini MTL before) and in fact, I was really a jerk, because it took me a while to figure out how to access to the deck. I thought we had to unscrew it like any RTA or RDTA, well no.

You unscrew the ring all below, you will have the 510 pin and you pull it out and it will come off on its own. I even used pliers to try to “unscrew the platter” while yelling, “But why can’t I get to the deck!”. I “slaughtered” the tank a bit with a pair of pliers, but it’s a Steam Crave’s product, so it’s very solid and the stuff hasn’t budged an iota and it vapors wonderfully!

Once the deck is removed you can change it to one of the other decks that is provided and install it by pushing it straight into the rest of the atomizer. An important thing is to be careful with the pyrex seal, as it is very loose and can break off quite quickly.

On Airflows, the Aromamizer Supreme V3 offers us a very versatile configuration. We have 3 possible Airflows with one, two or three opening lines. You have 13 holes in total. The three open lines will give you a very airy vape. The two lines will overlap between the restrictive DL and DL vape. 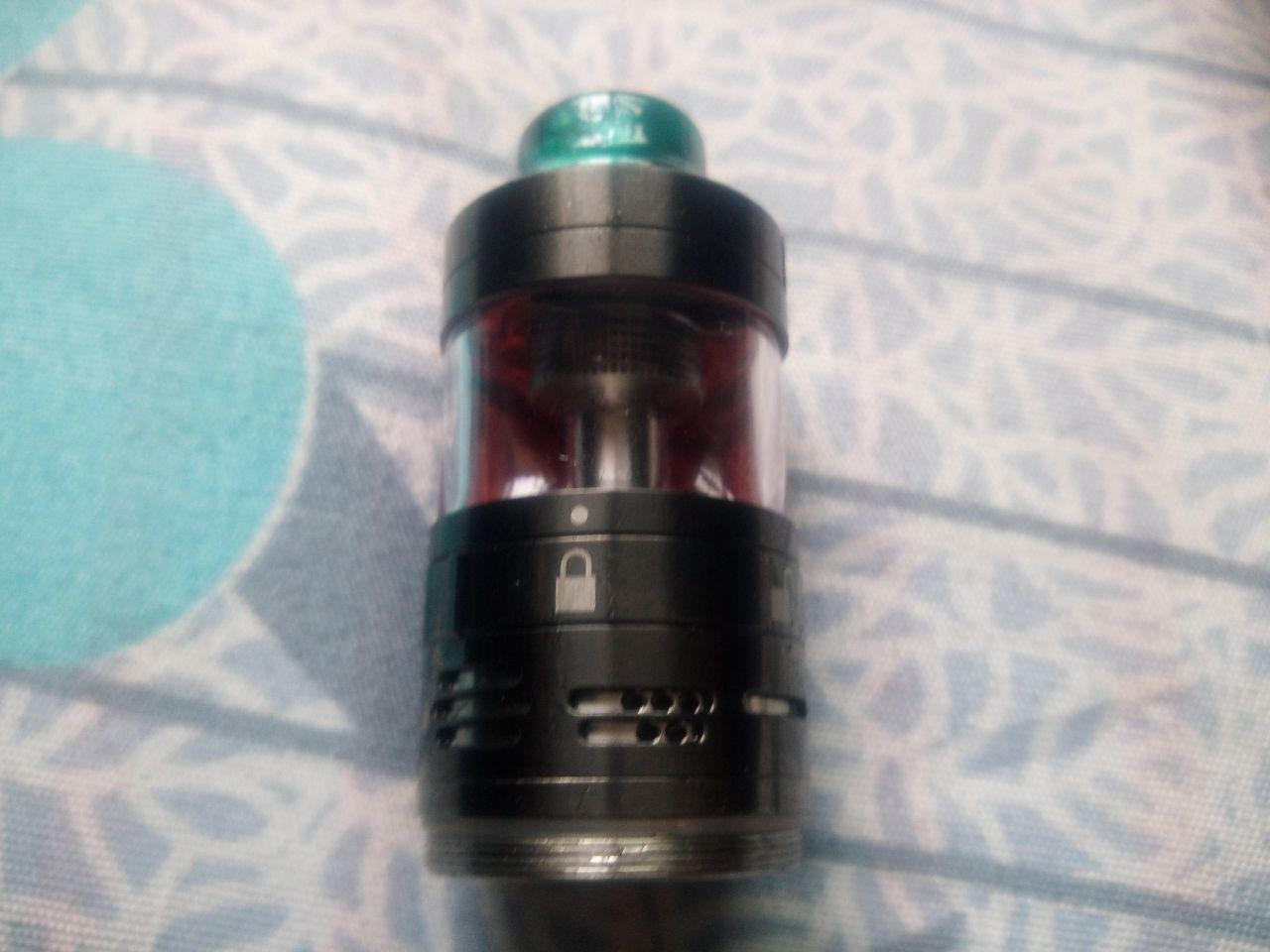 And just one line will give you a restrictive only DL vape. Personally, I use the two lines, half open which is perfect for my vape. Due to the design of the atomizer, the Supreme V3 will tend to run low if you only vape it in purely restrictive DL.

Like driving a Ferrari at 20 km / hour for more than 100 km. It is made for aery vaping and it can offer a vape at quite high powers. Personally, I vape between 50 and 60 watts in single coil. But it can make 100 watts if that’s your vape range.

The Aromamizer Supreme V3 sublimates a range that is already very powerful at Steam Crave. The Ragnar who wants to seduce lovers of the big vape, the Titan who is a unique monster of its kind. And the Supreme V3 which can seduce fans of Single coil in an atomizer format that we are not used to. In single coil, we are used to small format, like the Gear of OFRF or the RTA Druga.

The Supreme V3 proves that you can make a superb atomizer while maintaining the fidelity of a single coil. With its 25 mm for 59 mm with the drip tip, it is an imposing atomizer, but which will be able to go up to most mods. Although I think he can really express himself in dual coil. I could see 2 × 26 with 36 in 2.5 mm, but with Ni90. Ni90 heats up much less than Ni80 and it is more reactive (its resistance value is lower).

In single coil, a Ni80 2 × 26 fused clapton will do the trick. An alien could also work, but it could heat up if you chain vaping. For the price, we are around 70 dollars for the advanced kit. You can have more information on the official site and thanks again to Steam Crave for sending it to me to reviewing this beauty. In 2020, the Aromamizer Supreme V3 was among the Top 3 RTAs in Single coil and we can say that it did not steal this ranking.

My review of the RDTA Aromamizer Supreme V3 by Steam Crave. It is considered a flavor freak, but is it? Let's go for the review!