Vapefly Brunhilde MTL review, the most beautiful of Valkyries


Vapefly give us its Brunhilde MTL for those who like the indirect vape. Top Coiler fans will be delighted.

The Brunhilde MTL brings some modifications so that its Top Coiler is suitable for the mouth to lung vaping style. Vapefly is a brand of vape that appeared in 2017. And although this is the new guy in the vaping room, all of its atomizers have been hailed by the vapers. The Holic MTL RDA, the Galaxie MTL RTA, the Jester Pod but especially the Brunhilde RTA that he had released in 2018.

Brunhilde MTL, a gem of aesthetics

The Brunhilde MTL is a Top Coiler. This means that his deck is in top and his tank is underneath. You have two metal rods that will dive into the tank to bring the liquid back to the deck. For example, for lovers of high-end in the vape, we have the Corona that works exactly the same way.

When Vapefly released the first Brunhilde, many vapers were blown away by the design. The frame of the atomizer looks like an armor. Decorations inspired by Scandinavian mythology, all in a very good quality design. And as I say, 2019 is the year of the MTL and rather than offering another MTL RTA, Vapefly is rolling out its existing flagship model with the Brunhilde MTL.

Some small changes to the menu

Vapefly has not changed a winning recipe. So, he kept almost the same features as the first Brunhilde. Among the small changes, we obviously have the Airflow. For a Top Coiler to hit the road, the Airflow must be set very carefully. The Brunhilde MTL thus has 6 settings that can range from 0.9 to 2.5 mm. 0.9 mm is a very tight vape. But beyond 2 mm, we are already grappling with the direct restrictive vape. It’s a good thing to have this versatility.

However, in the pics, it seems that the Airflow is done with screws of different holes that we will need to put on the base of the deck. This is a bad point because it means that you can not easily adjust this Airflow. And when we see the package, there are 6 screws for the Airflow. When the first Brunhilde came out, there were critics that the filling hole and the Airflow were almost on the same ring.

A little quack in the Airflow

So, for his Brunhilde MTL, Vapefly decided to keep only the filling hole, but put the Airflow on the deck. Some are going to scream and they will be right. But we do not change the Airflow constantly once we have found a good setting. Once we know the diameter of the hole that suits us, then we put the corresponding screw and we forget it. In addition, as the deck is at the top, it is a little less boring to replace the screw of the Airflow. But this is still a bad point.

The capacity is 5 ml which is considerable for MTL. And the brand has enlarged the filling hole to 3.2 mm. The 50 ml vials should be able to pass without too much trouble. Vapefly does not mention it, but it’s unclear whether it has reduced the atomizer chamber to maximize flavors. The first Brunhilde was already excellent on the flavors despite being clearly destined for aery vaping. So, a small reduction of the chimney and this Brunhilde MTL will have everything to please.

The features of Brunhilde MTL

Even though it was criticized on this point, the Brunhilde MTL keeps the same appearance and especially, the same size. It has a diameter of 23 mm and the height is 59.50 mm with the Drip Tip. And good news, because Vapefly offers 2 Drip Tip, both in 510, but of different sizes. For the TPD version, there will be no 2 ml and this is also good news. You will simply have a silicone inside to reduce the capacity.

The package also provides 2 metal rods and a lot of accessories. The price of Brunhilde MTL varies between 45 and 50 dollars on Chinese sites. It’s more expensive than other atomizers. But Vapefly uses German materials. And in fact, the Brunhilde, whether it is the first or this one, is made with more than 103 German vapers/reviewers known as the German 103.

A Top Coiler in MTL

Am I going to buy it? I’m doing a collection of MTL atomizers. I have the Expromise V4, the Siren 2 and I will also have the Vapefly Galaxy. My 4th on the list was the MTL Gate of Ambition Mods. But I think the Brunhilde MTL will replace him. Why? 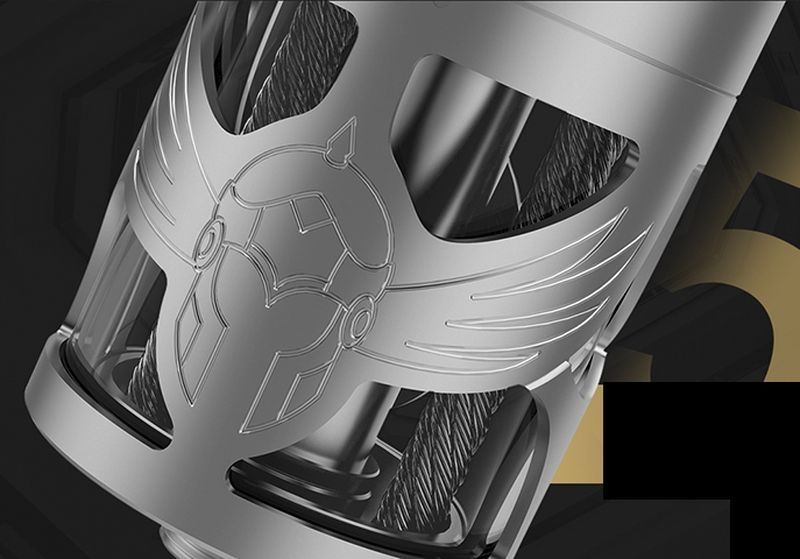 Because of the quality of building and especially the sublime design of the Brunhilde. In fact, the aerial vape is not my thing, but I wanted to buy the first Brunhilde just for his design. And so, now that the Brunhilde MTL is out, I can not miss it.

One thing about a Top Coiler like Brunhilde MTL is that it’s not a pantheon of flavors. It’s great, but you’re not going to climb to 7th Heaven. In addition, as the rods that bring the liquid back, then it is necessary that the tank is constantly half full. A Top Coiler will not work with a few milliliters lying on the bottom. But as I said, it’s worth a purchase for nothing but design.

Coiling and Wicking the Brunhilde MTL

In the pictures below, I show you how I did the Brunhilde MTL’s wicking. Easy as pie. You put the coil on, I’ve used Superfine MTL from Vandyvape. But any wire does the job. And for the wicking, I cut flush with the atomizer and I put the ends of the cotton directly on the metal rods.

The cotton is not very long and for the moment, it works pretty well. If you have Dry Hits because of your vape, then some advise to remove the middle rod in the two metal rods. This involves dismantling the whole thing, but I did not need it at the moment. 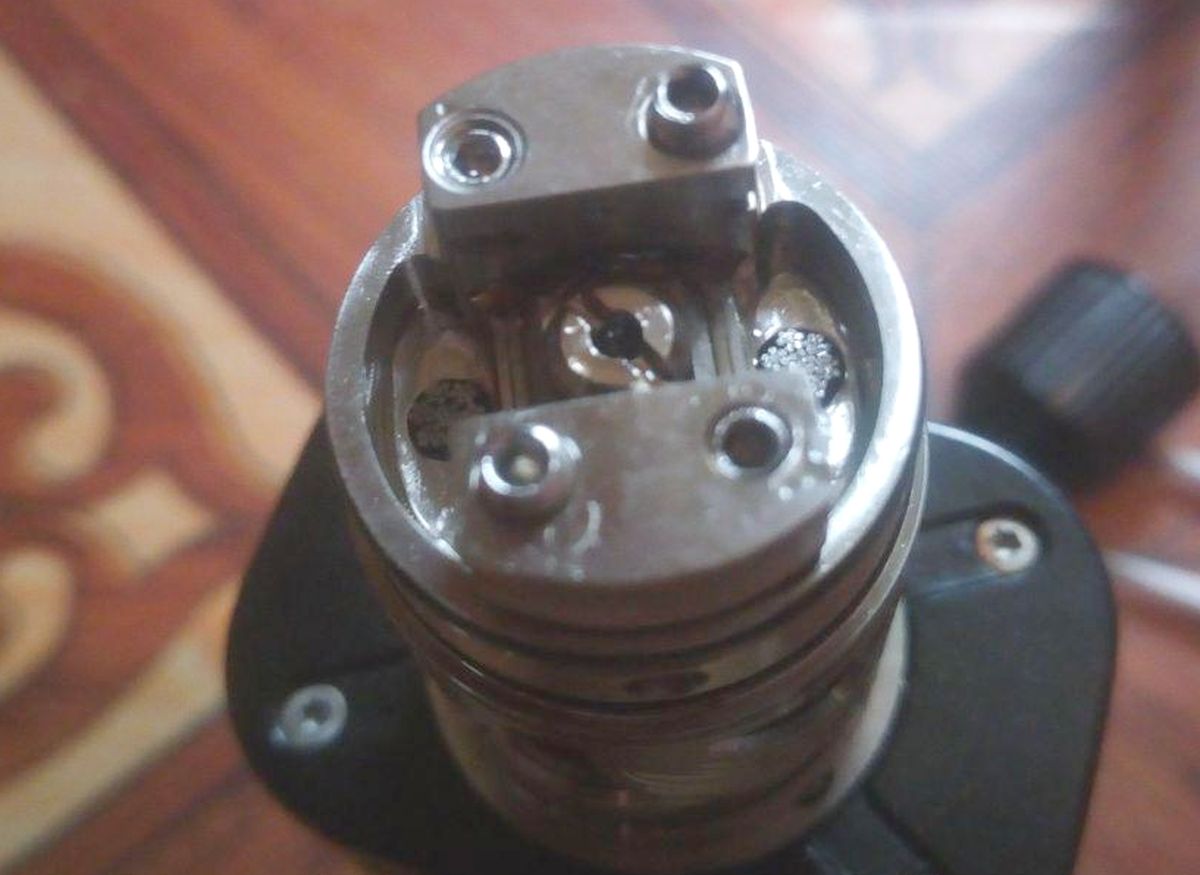 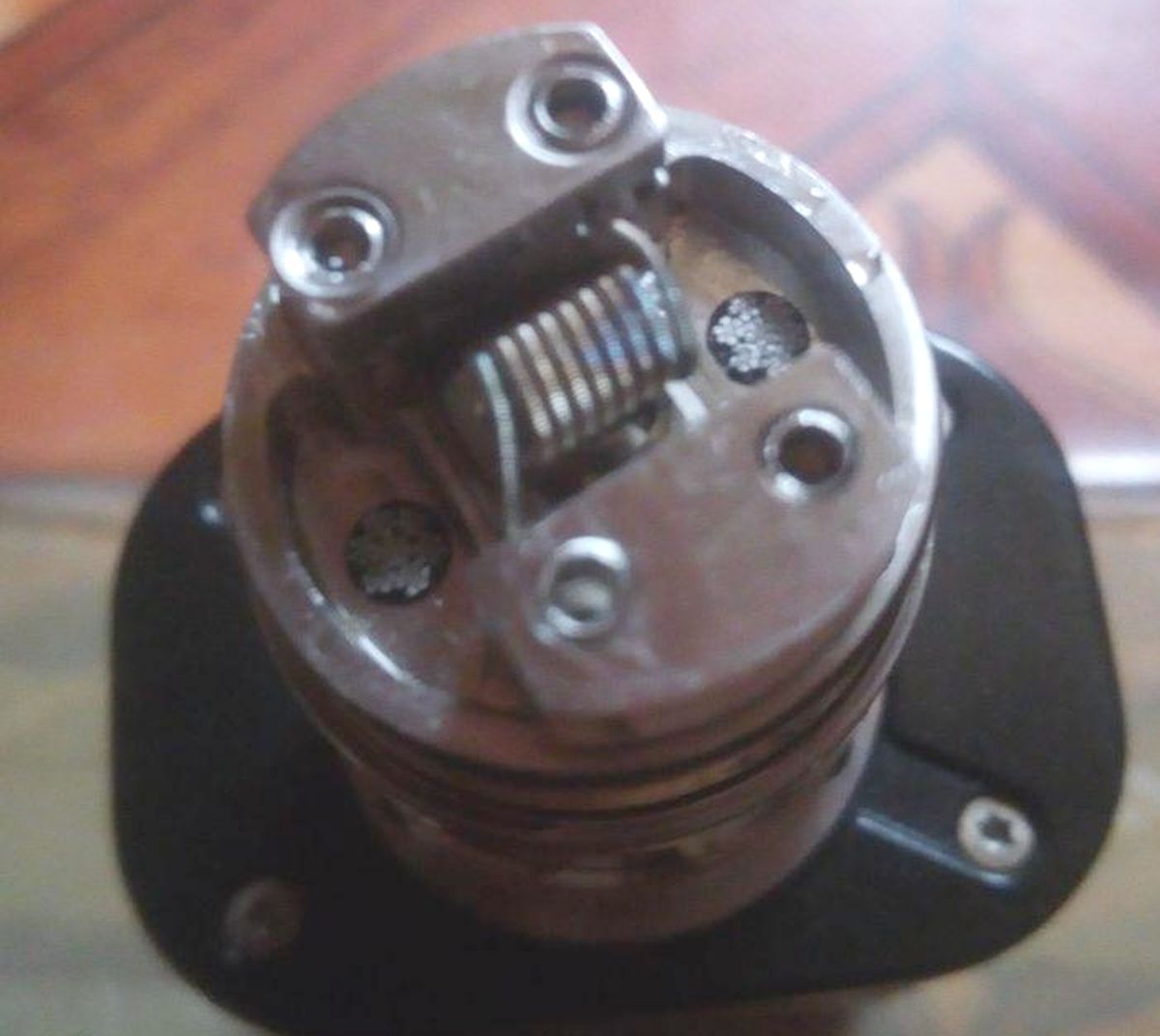 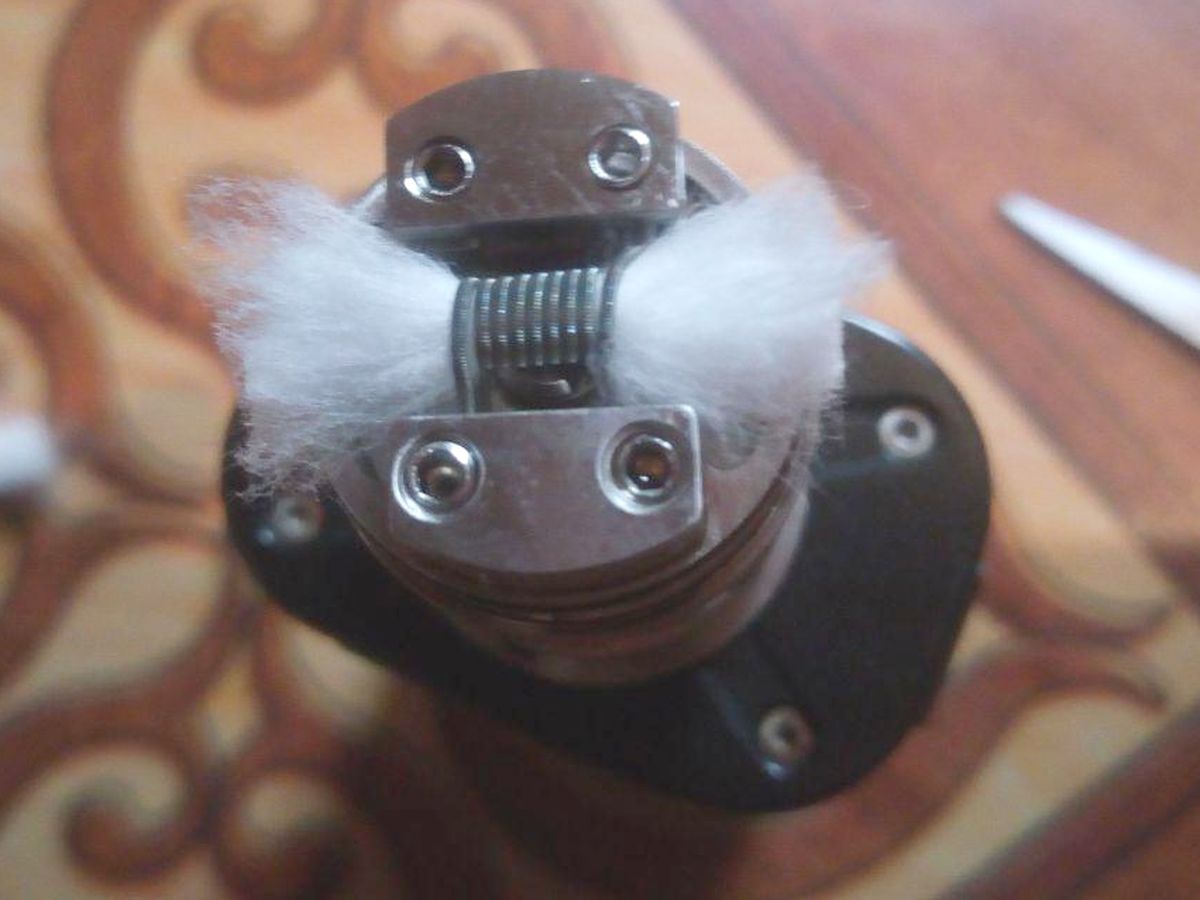 Cut the cotton until the edge of the atomizer 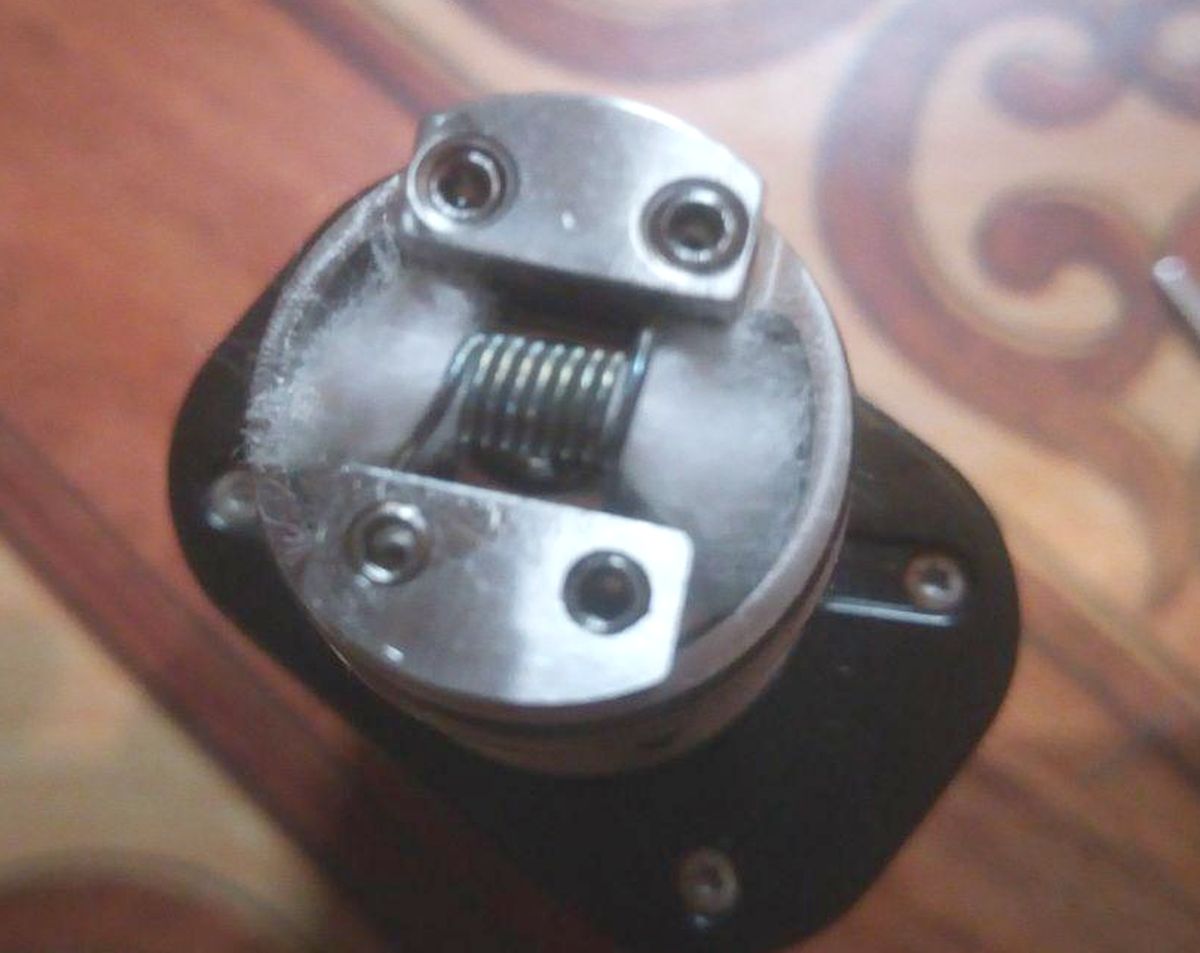 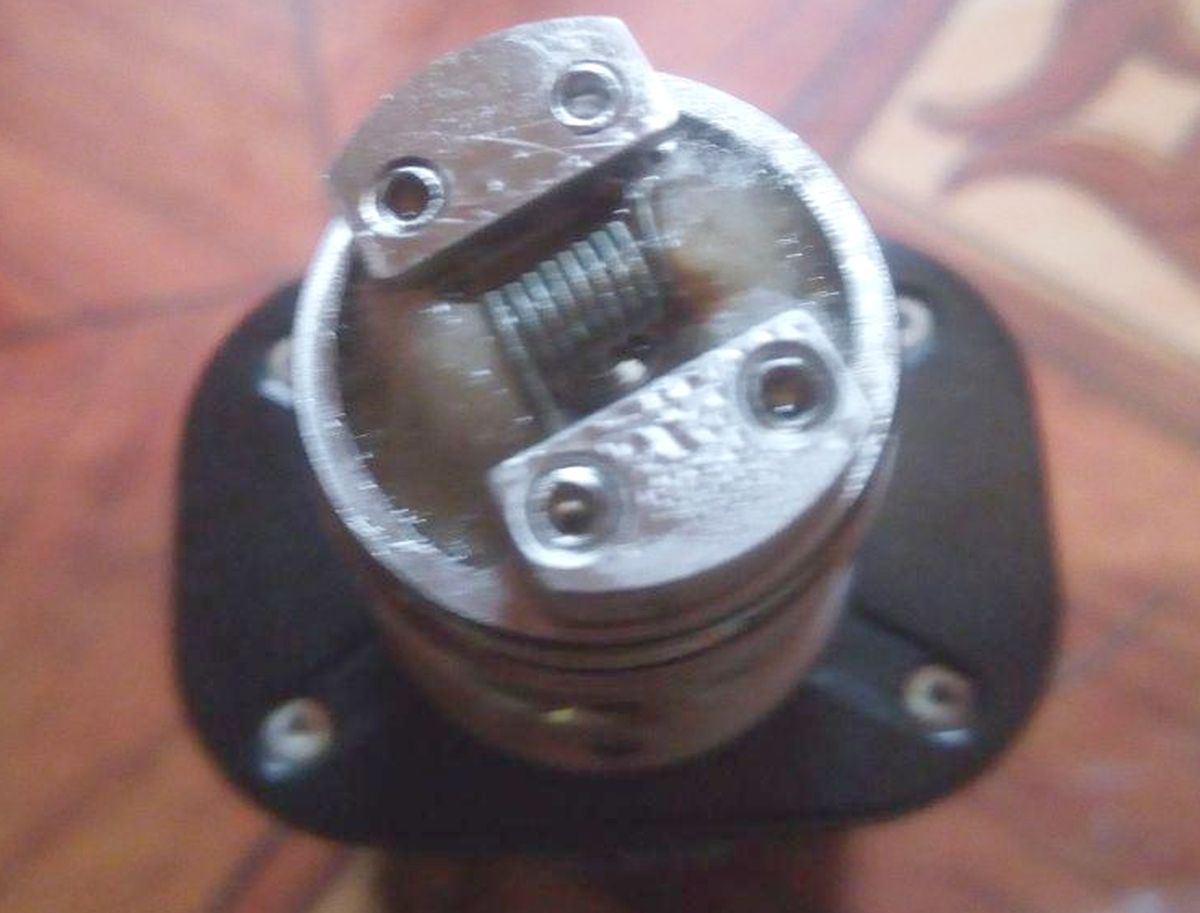 Where to buy the Brunhilde MTL?