Death because of vaping in the United States? Not really


In recent weeks, the CDC has gone to war against vaping. While the main culprit of recent respiratory diseases in the United States is THC oil, the main component of cannabis.

In July 2018, I had serious health problems. I went to the doctor, radio lungs and at one point, I wondered why he was showing me a picture of the landscape of Mars. The state of my lungs made me realize that 20 years of daily smoking is not good for morale and the rest. I started using e-cigarettes in September 2018. I switched overnight, even though the health problem in question did not come directly from smoking. I thought it was the moment or the time to abandon the fag.

My first vaping kit was a TFV8 Baby and for connoisseurs, it’s impossible to leave smoking with this thing (the saleswoman knew nothing about it). I combined it with a Joyetech’s Dolphin pod and my nicotine receptors thanked me. These are gear that can last a few weeks or months and you have to buy others. I just celebrated my first year without any cigarette. At the time I was smoking, if I had been told that I could do without a cigarette, even for only an hour, I would have said it was impossible.

The electronic cigarette is not a magic wand. You have to find the right gear, the right liquid and the right amount of nicotine. Even a year later, I had trouble “to find my vaping” as they say in the jargon. But I knew that the electronic cigarette is effective and my own empirical observation proves it. Like any tobacco weaning tool, you have to persevere and sometimes, in spite of all the efforts, vaping will not work. A randomized double-blind trial on the e-cigarette has shown that the smoking cessation rate is 18% compared to 7 or 8% of patches and gums. The hard quitting method is 2%.

The CDC is anti-vaping to death. It follows a typical American mentality to consider smokers as criminals and therefore, the smoker must stop in a brutal way, because God has decided so. Many American practices, for example, in the prison field with sentences of several centuries, justify that one should not save the person, but “reform the soul of the delinquent”.

As soon as these cases of pulmonary problems appeared, the CDC always indicated that the vape was the cause without mentioning what people had vaped. As if you were in a car with someone and that he stabs you in the back and you blame the car. As cannabis is increasingly legalized in the United States, it is difficult for the CDC to demonize cannabis, which is one of the most lucrative tax dollars for the government.

However, it also highlights what happens when you criminalize cannabis or any other substance. The majority of cases are listed in the state of Wisconsin where cannabis is banned. The result is that consumers are buying on the black market with the risk of having completely rotted liquids.

What was discovered in these people was that they had vaped THC oil cartridges containing so-called vitamin E acetate or tocopherol acetate. It is a thickening agent that is used frequently in skin creams. This thickens a given substance.

In 2018, several illegal brands of THC cartridges began using this trick to fudge the THC content in the cartridges. Basically, these manufacturers diluted their liquids a lot and added vitamin E acetate to make believe that the liquid has the right level of THC.

Basically, vitamin E acetate is fat. Its boiling point is 183 degrees Celsius. This means that if you put a liquid with this thing in an electronic cigarette, it will not vaporize (or very little), but most of all, when you have vaporized it, it will turn back to fat in your lungs.

And no need to have done 10 years of medicine study to know that it is difficult to breathe with fat in the lungs. At anytime the CDC and organizations like the American Lung Association, want to point the finger at the real culprit, as they had found the perfect pretext for demonizing the electronic cigarette.

And as a result, they are as criminal, fraudulent, and dishonest as Big Tobacco in the 1980s. But when you have $ 13 billion in tobacco taxes that fall into the pockets of the government each year, it’s hard to say yes to vaping and no to money.

But how to be sure that the electronic cigarette is safe? If you are looking for 0 danger in your life, then here is my advice, you buy a weapon and you put a bullet in your head. Risk 0 and danger 0 do not exist.

There are about 35 million vapers in the world and the electronic cigarette has been around for 10 years. No similar case has been reported while the e-liquid manufacturing standard is very different for each country. So, this does not come from nicotine liquids and especially not from the vaping.

But the electronic cigarette is an excellent tool for smokers. It was also a mistake to let in CBD, which is one of the components of cannabis in the vape, because it has no scientific validity in this area. CBD oil shows some benefits, especially in epilepsy, but in vaporized form, we still need good studies.

It made us believe that we can do anything and everything. In Europe, it is impossible for similar cases in the USA to occur. We have the Tobacco Product Directive (TPD) which obliges all manufacturers to notify their liquids, meaning to do all the tests to show that it is safe. You can always buy bad liquids on the black market, even in Europe. But it is the fault of the consumer and not the electronic cigarette. It is a tool, you must use it with proper counseling and follow-up therapy if it is possible.

In terms of politics, others countries must not follow the United States, which is falling into hysteria in all areas. It’s not just the e-cigarette, but glyphosate, GMOs, and I’m not even talking about nuclear, where a HBO show has more scientific weight than the nuclear authorities. The others countries, on the vaping, must follow the example of England embracing the vape. New Zealand, after being reluctant, made a 180-degree turn on the e-cig.

My advice, do not vape if you are not a smoker. The lungs are used to suck and breathe air and nothing else. If you are a smoker, it is mandatory to test the electronic cigarette at least once. Do not buy anything before to know what your are doing. Find a good shop of vape that makes you test your liquids before buying and offers a kit for beginners that can swing large doses of nicotine, because it will be necessary if you smoke a lot.

The same thing for minors. The vape is prohibited for minors. But if your offspring is already starting to smoke, it will be much wiser to switch him to vaping instead.

Good deals of the week

The Brunhilde MTL from Vapefly

The Brunhilde MTL RTA from Vapefly is the MTL variant of the famous Top Coiler of the same name. 5 ml of capacity, German quality metal rods come to draw the liquid. An RDTA that can become one of the best MTLs on the market. The first Brunhilde had caused a sensation and this variant MTL have the potentiel to do the same. $ 33.90 $ 49.99 on Sourcemore with the coupon BMR.

33,90 dollars on Sourcemore with the coupon BMR 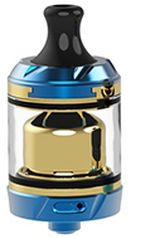 Hellvape’s MD RTA is the new MTL bomb from Hellvape. Inaugurating a turntable on the deck, this RTA allows you to configure your Airflow to the smallest detail. The reviews are unanimous, because the MD RTA offers flavors superior to tanks like Kayfun which is not a lesser compliment. It is considered as one of the best MTL of 2019. And you can have it on Sourcemore for 29.99 $ 17.39 $.