The Dovpo MVV II is a semi-regulated mod with a potentiometer to regulate the power. The brand Dovpo has nothing to prove in the vape. His Topside mod, whether Single or Double, is considered one of the best Squonk mod on the market. The Dovpo MVV I was released a lot of time ago and this time, the brand offers us a V2. Not many changes, the brand keep the recipes for success and we just have an emphasis on design.

The Dovpo MVV II is a semi-regulated box with a potentiometer. Power up to 280 watts, double battery. USB Type-C. The battery panel is customizable. An excellent mod at an affordable price for potentiometer fans. 23.64 dollars on Sourcemore with the DMII coupon.

23,64 dollars on Sourcemore with the coupon DMII

The features of the Dovpo MVV II

We need to talk, on all the product pages, the Dovpo MVV II is presented as a Mod Meca. And no, it’s not a Meca mod, but simply semi-regulated. Even the semi-regulated term is not suitable and it’s 100 % electro mod except that you use the voltage rather than the watts to adjust the power.

The Dovpo MVV II can swing up to 280 watts on paper even if we know very well that 2 batteries can not deliver such power. And above all, who is vaping at 200 watts? This mod has several protections like the one against the short-circuit, the reversal of the batteries, against the overheating and against the Chain Vaping. So you risk almost nothing unlike if you use a real mod Meca.

The Dovpo MVV II have the USB Type-C and it is good that the vaping’s manufacturers get up to date. It makes things a lot easier. The alloy is made with PC and Zinc. The Dovpo MVV II is much more customizable than the V1. The battery panel is magnetic and interchangeable. On default, Dovpo offers 3 beautiful patterns with the Hannya, Dragon Samurai and Skull & Roses. 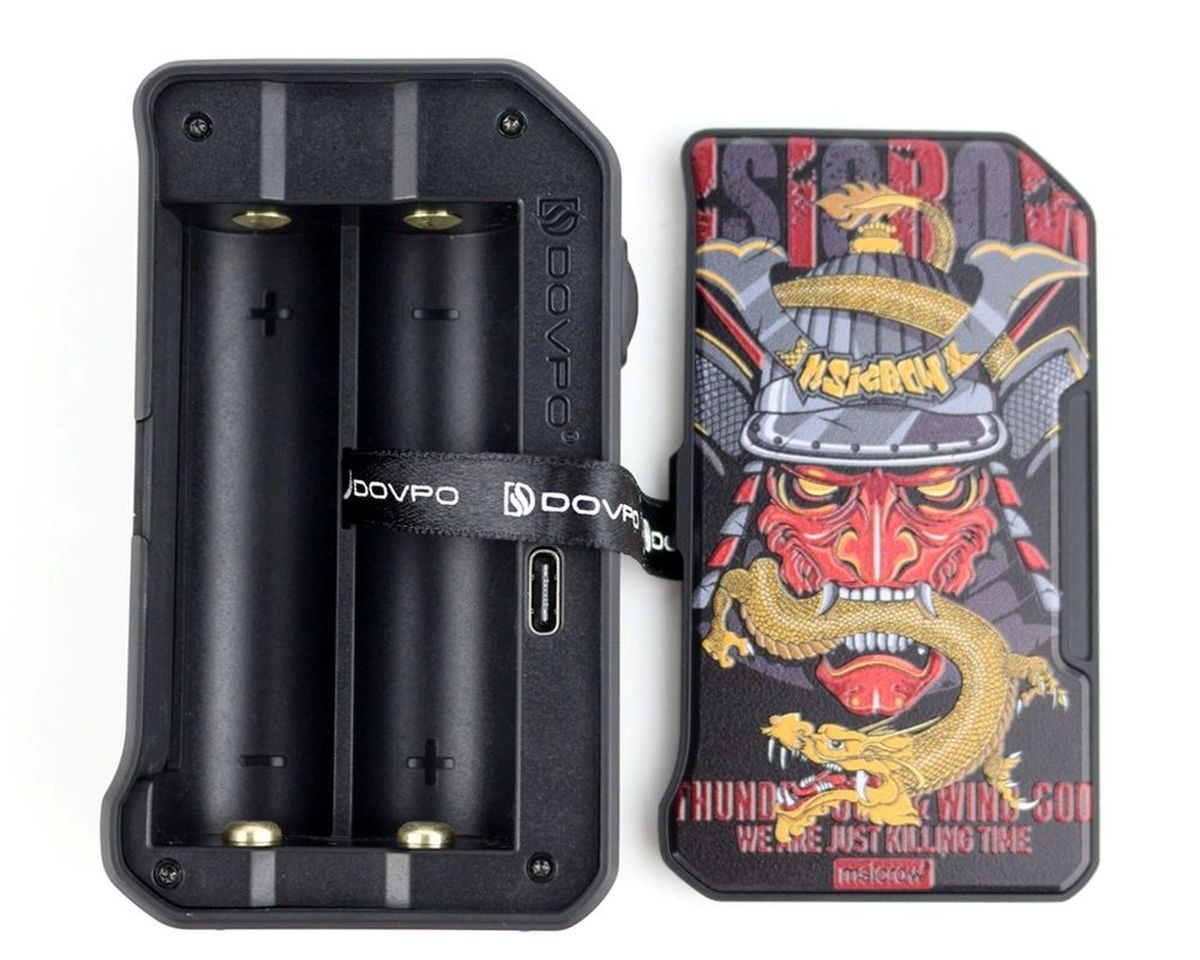 As mentioned, the power setting is by voltage, ranging from 1 to 8 volts. A little con is that the potentiometer does not indicate the precise voltage, but only positions ranging from 1 to 5. And in this kid of a mod, it will be necessary to pay attention to the coils that you will put in. It’s not dangerous, but be careful.

For example, your coil is 0.4 ohms and you are at 2 volts and then you go to a coil of 0.15 ohms staying at that voltage. You will take a rather brutal vape in the face. This type of mod with potentiometer has its fans, but it also has its disadvantages. Even if the power is constant, we often spend a lot of time adjusting the potentiometer which can become annoying.

The Dovpo MVV II is a semi-regulated box with a potentiometer. Power up to 280 watts, double battery. USB Type-C. The battery panel is customizable. An excellent mod at an affordable price for potentiometer fans. 23.64 dollars on Sourcemore with the DMII coupon.

23,64 dollars on Sourcemore with the coupon DMII

The price of the Dovpo MVV II

For mod of a high quality, with a good emphasis on design, the price of the Dovpo MVV II is unbeatable. In some chinese sites, we can have it for less than 40 dollars and even less with coupons.

The first MVV cost around $ 40. What makes us a box of excellent quality for a very affordable price, given the quality we have already seen with Dovpo. The price is also explained that you do not need a Chipset that launches Disco music while you’re vaping. But this type of mod is for particular vapers and it’s not my kind of mod, honnestly. He can be at the bottom of my Wish List, because its price is really interesting.

Where to find the Dovpo MVV II