Jester Pod from Vapefly is a rebuildable Pod. After Smoant’s Pasito Pod, it’s the new trend of the moment.

Note : Thanks to VapeCiga to send me the Jester Pod for the purpose of this review. You can buy it directly from their site.

VapeFly’s Jester Pod shows that the Chinese are creating the vape trends. Almost at the same time, Vapefly and Smoant release their fully rebuildable Pods. The principle is similar with some variations, especially on limited editions. The rebuildable Pod is another hinge to complete the vape.

Good deal on the Jester Pod

The brand Vapefly give us the Jester, a rebuildable pod. Worthy rival of Smoant’s Pasito, Vapefly is known for the quality of its products. The Jester pod is directly rebuildable unlike the Pasito RBA deck approach.

The fashion of the rebuildable Pod 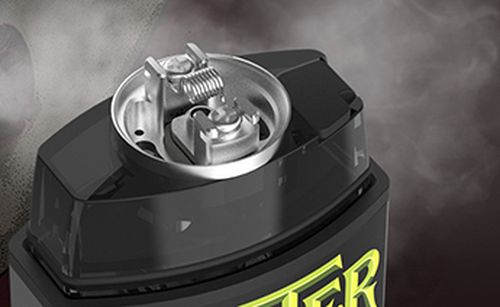 But still it is necessary that the Jester Pod or the Pasito Pod get the job. If the deck breaks after a few uses, it sucks, isn’t Smok? Jester and Pasito are similar, but slightly different approaches. The Pasito Pod propose the RBA separately. In contrast, the Jester Pod offers two editions, Mesh and DIY. But we still do not know if they are two different products or included with the same kit.

The features of the Jester Pod

The Jester Pod have a 1000 mAh battery with a capacity of 2 ml. For high nicotine salts, it is more than enough. Autonomy is sufficient for a day depending on the brand. But it depends on your way of vapping. If the Jester Pod is your only Pod, I would be surprised if it holds the day.

But in general, intermediate vapers have a double setup. An atomizer or clearomizer for a vape All Day with 3 or 6 mg. And a Pod with 20 mg for their nicotine shoot on occasion. The Jester Pod has 3 types of voltages with 3.3 volts, 3.8 volts and 4.8 volts. So I think it can be compared to Q16. This pod is clearly MTL because the recommended range is a coil of 0.8 to 1.5 ohm. A novelty of the Jester Pod is that it also offers Mesh pre-made coils in 0.5 ohm and they have an Airflow.

Good deal on the Jester Pod

The brand Vapefly give us the Jester, a rebuildable pod. Worthy rival of Smoant’s Pasito, Vapefly is known for the quality of its products. The Jester pod is directly rebuildable unlike the Pasito RBA deck approach.

A airflow on the coil ?

I had trouble understanding. What is the point of putting an Airflow on the coil. And maybe they were wrong in the description, but in fact no, on the image, we see an Airflow directly on the coil. The vape will be semi-aery and we understand why Smoant released his Pasito Pod or that Vapefly offers the Jester Pod. They will totally embrace the Mesh for their pre-made coils and offer the rebuildable at the same time.

In the vape style, factory coils were less powerful than the rebuildable. The latter had more flavor and it was cheaper. Mesh allows for a tie in flavor and durability. Many people agree that saying Mesh is as tasty as good rebuildable.

And there, manufacturers like Smoant or Vapefly are very smart because they can target two audiences. Those who find that the rebuildable is complicated and they want factory coils that hold up. And those who can are already experienced in rebuildable. For these consumers, this could be an argument to bring them to the Pod.

Marketing’s gimmmicks on the Jester Pod

Vapefly promotes its Jester Pod as a fully rebuildable, drippable Pod. They say that he can be used as a Dripper. It’s wrong. The inhalation hole is much too small to put drops without removing the cartridge. And if you constantly remove and put back this cartridge, then it will become looser and the pod will not close properly.

The Jester pod is more like an RDTA. You have the deck and then the tank that is right below. So, if you buy the pod, make sure that the cotton dips well into the holes to draw the liquid in the tank.

A disadvantage of the Jester Pod compared to the Pasito is that you can not test the coils separately.  This means that you will need to test the coil directly with the pod. In addition, the RDTA’s concept poses a problem, because you will have to perfectly control your wicking. Otherwise, you will have Dry Hits more than usual.

Smoant was pretty brilliant. When you buy his RBA for the Pasito, then it offers you a base that you can use on a coilometer or a mod. The Jester’s deck is attached directly to the cartridge. But we can run the coil with the pod, but it’s still a little strange. However, the Pasito RBA is a pain ass to build while it’s a breeze to mount the coil on the Jester.

Regarding the flavors, they are present. And they are quite similar to the drippers we could have in 2017 or 2018. And as the dripper generally offers the best flavors, it is a compliment for the Jester who succeeds in a good tour de force with such a simple deck. But personally, I prefer the Pasito de Smoant approach which is more traditional with a true RBA.

The price of the Vapefly Jester Pod

The Vapefly Jester Pod costs between $ 25 and $ 35 at Chinese sites. The price will vary depending of your country. It is a very acceptable price. And it is in the range of Pasito Pod which is around 35 dollars (price without promotion).

Vapefly is a recent brand since it appeared in 2017, but all of its products have been successful. The MTL Galaxies, the RDA Holic MTL and now he come to the pods. Smoant is also a recognized brand. So, this is very good news for rebuildable pods. Either it’s just a test from these brands or we can expect a rebuildable pod tsunami.

Where to find the Vapefly Jester Pod ?