THC Tauren One review, did you say Single Coil?

An update after many vapers reported on the Tauren One RTA. Thunderhead Creations really did shit, because one of its components has 5 millimeters more. The result is that the Tauren One never displays the good ohm value. In some boxes, it displays correctly, but on others, you sometimes have a difference of 0.10 ohm. This means that if you put a 0.20 ohm coil, then your boxe will read it at 0.30. A french video explain the problem and he give also advice to correct the problem by your own.

And such a variation of resistance can burn your Chipset, but above all, it can be deadly on a Mecha mod. For example, if you are vaping on Meca and you think that you are safe with your coil at 0.25 and you have a drop of 0.15 ohm on the mod, then your batteries will explose immediately with the risk of an accident. The worst thing is that THC did not call back all the defective Tauren One and that it simply offers to replace the defective part by contacting them first.

So, if you have a Tauren One, then test it on several boxes because the defect is present on all of them at the moment. And if you want to buy a Tauren One, then wait 2 or 3 months for the current stock to be exhausted and the new batches have corrected the problem. But it is impossible to know if the one you bought, even several months later, has corrected the defect. In the vape sector of 2019, this is an unacceptable mistake from THC!

What THC should have done on the Tauren One: Recall all defective products and replace them. Post an information notice on the product page of its official website. Ask its distributors and dealers to relay the message to avoid putting vapers in danger.

Yes, it’s expensive and annoying, but that’s what you expect from a brand that offers products to thousands of vapers. That’s what happened with the Hellvape Fat Rabbit. Before it was put on the market, they detected a problem and they have delayed the distribution to correct everything. It also shows that the quality control of THC is just a joke.

The THC Tauren One is coming to the world of single coils. The THC brand is known for its RDAs whether Solo or Tauren. He also offered Meca tubes of good quality. And this time, THC come to the RTAs with the Tauren One which has the distinction of being in single coil.

19,80 dollars on Sourcemore with the coupon TOR

The features of Tauren One

In RTAs, we often have extreme sides that are well supplied. On the one hand, MTL RTAs in which we have plenty of atomizers since 2019 and cloud chasers with Zeus X, Brunhilde and other Double Coil monsters. We don’t have a lot of single-coil atomizers apart from Gear and Wasp Nano. And so, even if the THC Tauren One does not revolutionize anything in particular, it’s still a good point for diversity in the vape.

The THC Tauren One is a 24 mm RTA with a capacity of 2 ml. Bad point for me even if we can extend it with a bubble to 4.5 ml. The Gear had 2 ml, but it is above the Tauren One on flavor. The Drip Tip is in 810 and the atomizer is in SS. We have the usual colors like blue, gold, black, gun metal and rainbow.

A superb deck in single coil!

One of the reasons for this review of THC Tauren One is its deck which is just superb. Because yes, the Gear is also excellent, but it takes patience to master it. That of Tauren One is not gigantic, but there is some of space. It’s almost postless and we can put the coil in different setups. 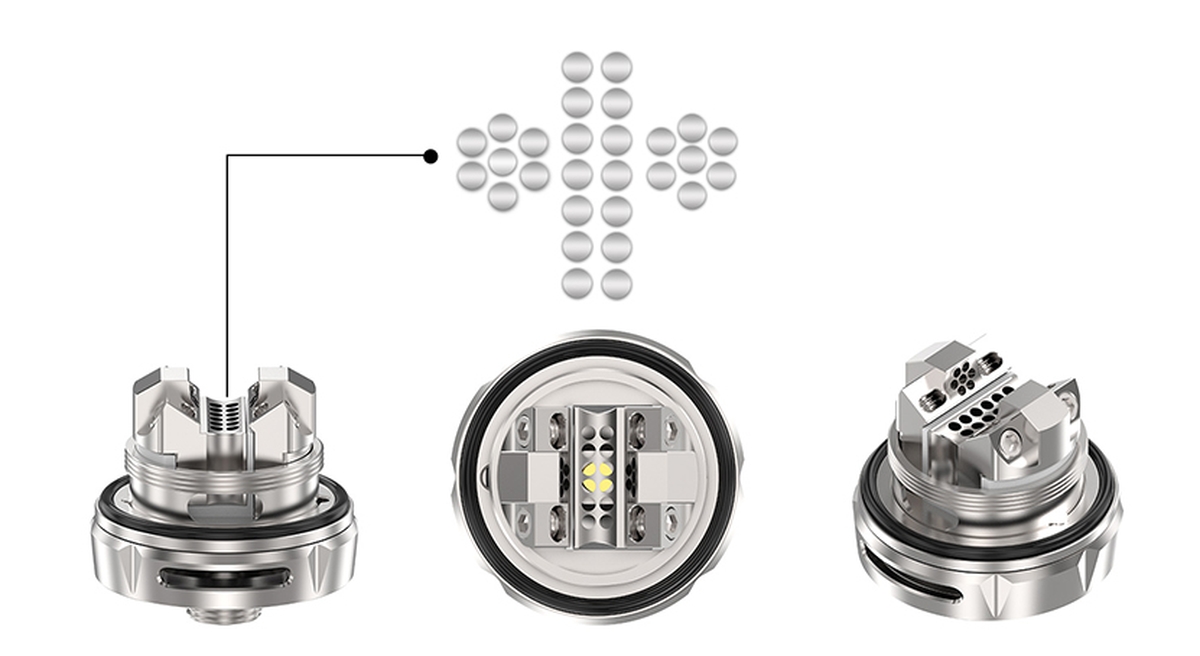 The deck remains small, so do not plan to put an Alien or a Framed in this thing. But a small Fused Clapton, but especially micro-aliens will be perfect. The Tauren One remains a bit airy, because we do not have this trapped form characteristic of the Gear. Yes, I compare apples and oranges, but that’s the only reference for me.

19,80 dollars on Sourcemore with the coupon TOR

Like all vape brands, THC claims that its Airflow is revolutionary. This is the famous Airflow in honeycomb structure. Well, many brands have been offering it for quite some time. We can mention the Wotofo Recurve, the Kylin Mini or M (the one in Mesh) and the Kensei.

But it is a good structure, because airflow in honeycomb can deliver more air on the coils by increasing the flavors. This also allows the cotton to imbibe completely, but be careful because this structure makes it vulnerable to leakage. The Tauren One has adopted a Honeycomb structure in 3D. They just slightly distorted the structure of the honeycomb to have a more homogeneous airflow.

The Airflow is very optimized, because it goes through the air holes and goes directly into the Honeycombs to come and hit the coils. The small problem is that you will sometimes have a turbulent vape because it is not in a straight line. Hence the interest of Single coil to have a smooth vape without the cyclonic effect. The Airflow will come from the sides, but also from below.

The Tauren One is supplied with a 2 ml straight tube and another 4.5 ml frosted type bubble. The brand claims that this bubble is unbreakable, but in fact, it is simply more resistant. A little bad point anyway, because why not Frosted on both tubes.

The filling is very classic and is done from the top. We have slightly curved metal slats to prevent this from overflowing on the edges with big bottles. Airflow is from the bottom, a classic system. This RTA will give you a middle between an aerial and slightly restrictive vape.

Overall, the Tauren One is an excellent RTA and as I said, it’s an interesting addition to single-coil RTAs. The flavors are present, but we do not have the level of a Gear that will offer a more saturated vape. Very few cons except the Frosted which is only present on the Bubble and possible leaks if we do not master the cotton.

Where to find the Tauren One?