The end of vaping on Youtube? (the case of BreakingVap channel)


BreakingVap, one of the biggest Youtube french channels on vaping, closes overnight. The end of vaping on Youtube?

Thomas Bonnard, the owner behind BreakingVap, announced that he was closing his Youtube channel. The message does not say if his channel was closed by Youtube or it is he who throws in the towel.

But that goes back to what I said last time with American web hosts who were suspending sites directly. When we go on his channel, all videos have been removed! BreakingVap was the biggest French vaping channel on YouTube, reaching almost 70,000 subscribers. 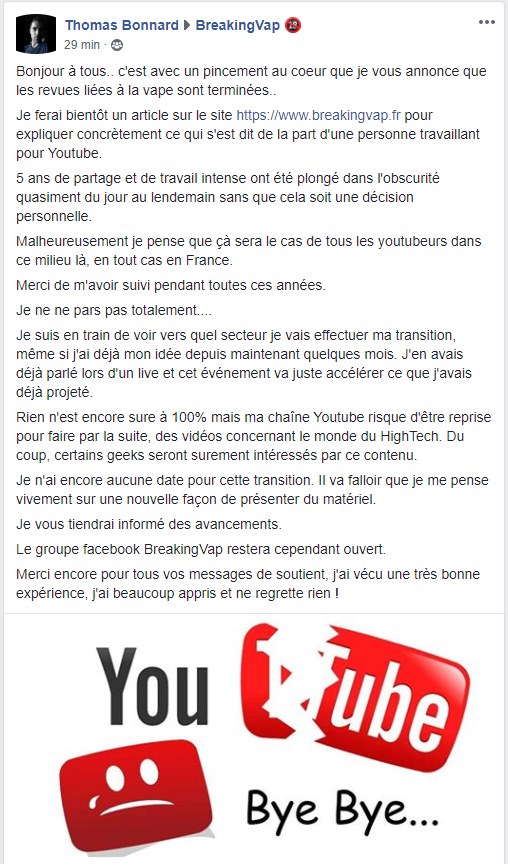 It must be a disaster for the guy. 5 years spent working on his channel, to offer content almost every day, purchasing of gear, half a decade of work, reduced to dust by Youtube and this bastard anti-vaping propaganda in the United States. His Facebook group will continue to live, but for how long. He also has his own website where he can probably publish reviews.

But as Youtube get him the majority of his income, I do not think he stays in vaping. In his message, one feels an absolute despair. He’s going to turn to Hi-Tech and that kind of area. But he says it himself: The same thing will happen to all vaping youtubers. And if it affects France, then it must affect all versions of Youtube.

I had said that if web hosts could suspend sites in a snap, then Youtube, Facebook and Twitter will do it, even more quickly. But for websites, we can migrate elsewhere if we have backups, the world is vast and there are always countries to welcome you. England is pro-vape to death and you will never fear anything if you take a British host.

But since I run a vape site, you must know that income is almost non-existent. In the best months, I make 15 to 20 dollars a month on the affiliation and the Chinese brands don’t like vaping websites. For them, what counts is the number of subscribers and then, that’s all.

Youtube is an American company and therefore follows American laws. Company know that anti-vaping associations and NGOs will run after him to extort money if it does not do what it takes to protect the “innocent youth against vaping”. So, Youtube intervenes upstream to be unassailable at the legal level.

My site is very small, so if my host piss me off, then I would close the site. But for people who make a living from vaping, it’s an absolute calamity. Thanks to the United States, you will be always the best to mess everything up!

Breaking Vap has published an article (in french) that explains what happened on his channel. Basically, he received 2 Strikes within a week. A YouTube Strike occurs when one of your videos does not comply with the platform’s policies. In general, it is related to copyright infringement, but it was completely different for the case of Breaking Vap.

Breaking Vap received these Strikes because Youtube moderators considered that e-cigarettes could be dangerous for children. And Youtube, of course, discourages the use of products that can be misused by children and produce accidents. So, this has nothing to do with nicotine. The first Strike of Breaking Vap concerns a pod and the second concerned a boxe. In the latter case, there was no mention of e-liquid or nicotine. 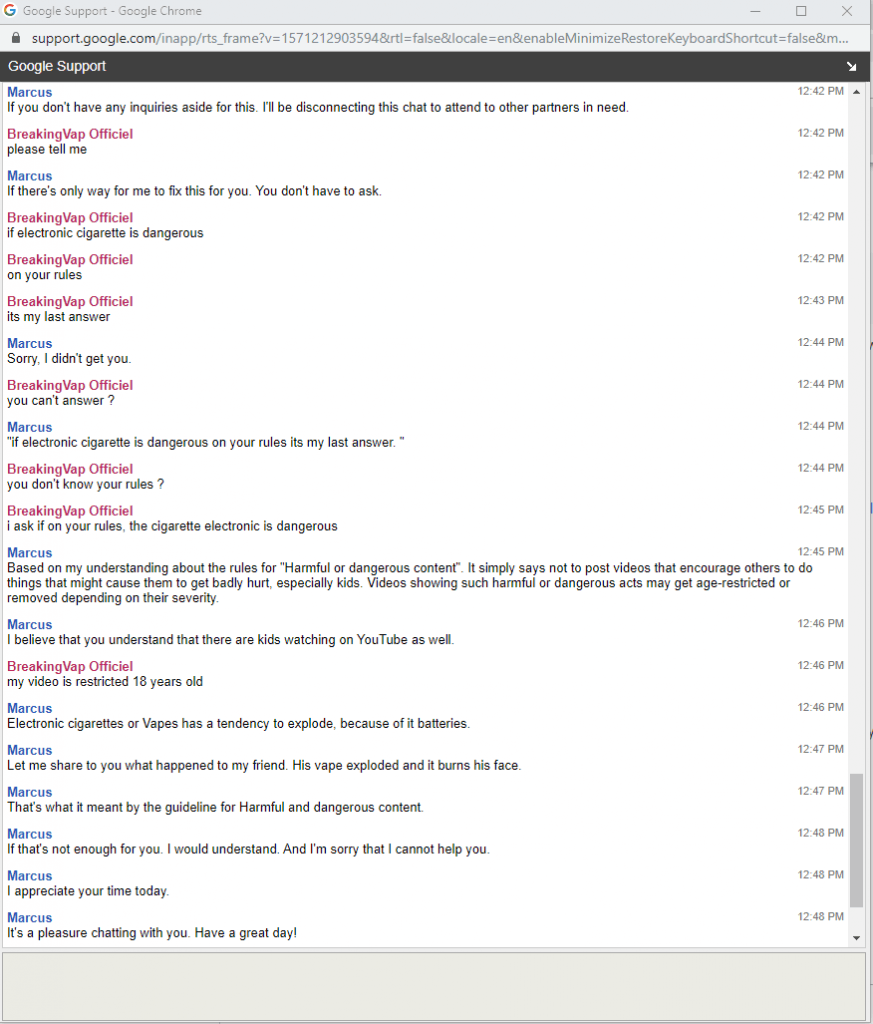 The most important information is in the ones I have framed in red : 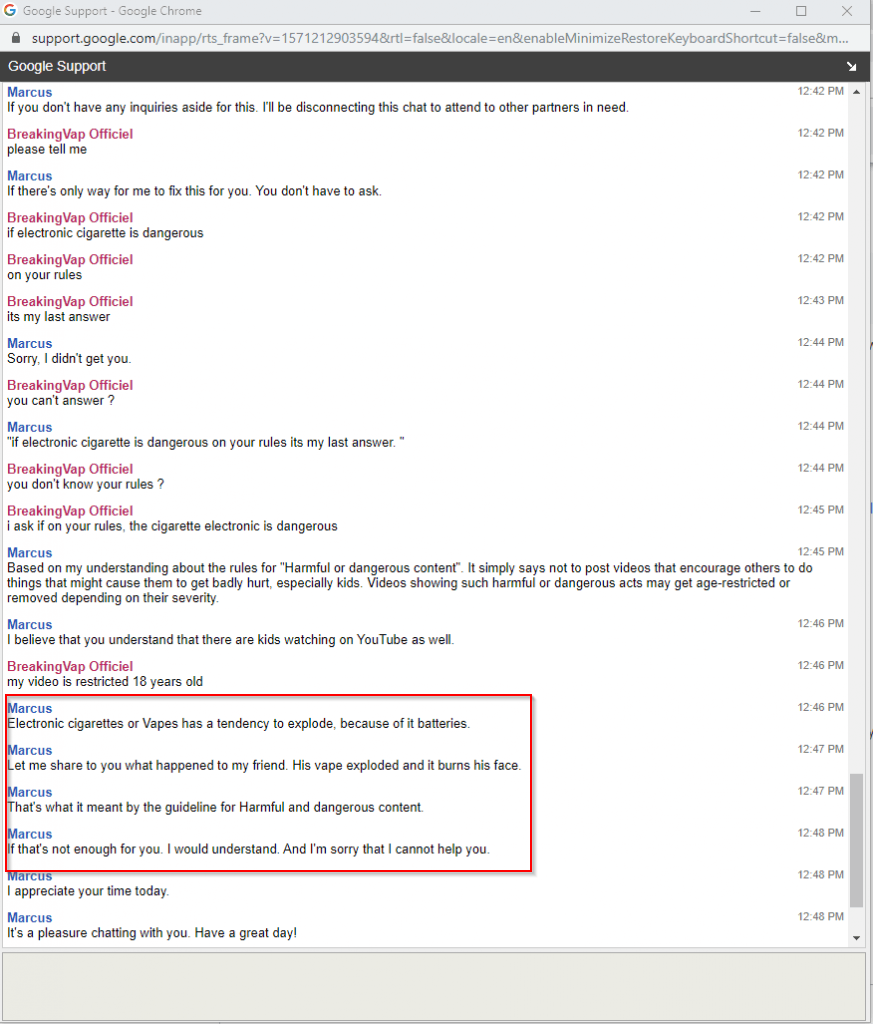 This censorship on vaping channels comes from moderators of Youtube and no, from the platform itself. I am familiar with the moderators of Youtube, because they are completely idiots. They have a list of criteria they need to check on Youtube channels, but their personal opinions also matter. Here, in this response from a guy from Youtube, it is clear that it’s personal.

Because technically dude, we do not care what happened to your friend, who was stupid enough to play with dangerous batteries. He probably played with a Meca mod, because it is very rare if not impossible that a Electro box explode. I already had the same problems with articles written on another site. The article was about the famous British study, which showed that vaping was twice as effective as all the other tools of smoking cessation. No promotion of the vape, in there, but only an article of scientific topicality.

And yet, I had to remove all the ads because of “tobacco promotion”. This was about advertising and they failed to get me to delete my article. But on Youtube, your content belongs to them. This certainly proves that there are anti-vape haters at Youtube France. Because Youtube England or USA are absolutely not affected. It’s also proven by the fact that a pod just can not explode … unless you throw it into the fire.

The truth in this case is that there are people at Youtube who hate the vape to death. So, unless Youtube cleans up seriously, it can affect anyone, no matter how. It is not a matter of compliance, it is a matter of personal hatred against the vape. This means that you can put all the warning and awareness messages before a vaping video, these bastards moderator can still sack it.

But as Youtube is not precise on vaping, then these moderators can not attack all the vaping channels (even if they would like it), so from time to time, they will destroy a channel for that the problem is not reported to the governing bodies of Youtube. I had seen the same thing in political Youtubers, turned to the extreme right, who were censored by Youtube moderators.

This is the real problem when Youtube is in fully automated mode with moderators, from all countries, who have all their opinions. Because of the salaries, very few moderators are European. Mainly, they are from the Maghreb, Indonesia or the USA. And as Americans are completely delirious on anti-vaping, this type of response and behavior is no a surprise.

And there is no real solution against this shit unless you go on another platform. Which means you have to start all over again.